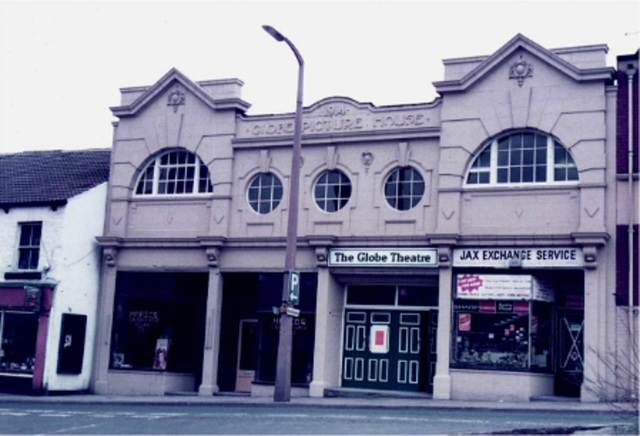 The Globe Picture House was the last cinema to open in Barnsley just prior to World War I, at the beginning of September 1914, and the first film shown is thought to have been “Martin Ruma”.

The proprietors were the Globe Picture House (Barnsley)Ltd. The front of the building had a white tile faience above the entrance with a shop unit on either side of the central entrance doors. An arch window was placed above each shop unit with three round windows above the cinema entrance and an illuminated ‘Globe’ sign above these in the centre of the top parapet. Sound was installed in November 1929 and the first ‘talkie’ shown was “Kitty”. New holophane lighting was installed in 1932. Seating was originally for 1,000 on two levels, but by 1941 was listed as having 872 seats. The proscenium was 25 feet wide.

In 1960, the Globe Picture House went over to part time bingo on two or three nights a week, films being retained on the other evenings. In June 1962 the Globe Cinema went over to full time bingo ‘By Public Demand’ it stated in the Barnsley Chronicle. The final films - “Nymphettes” and “Infidelity” were shown on Wednesday 20th June 1962.

In the early-1980’s the building was compulsory purchased by the South Yorkshire County Council to make way for the proposed Western relief road. However, the Globe was granted a reprieve and leased to the Barnsley Theatre Trust and converted into an amateur live theatre and was used by the Barnsley Playgoers Society, The Barnsley Junior Operatic Society and the Barnsley Childrens Theatre Group. Barnsley Playgoers reopened the former Globe Picture House with their production of “Filumena” on 14th March 1983. Final closure came on the 7th April 1990. The Globe Picture House was then demolished for the road widening scheme.