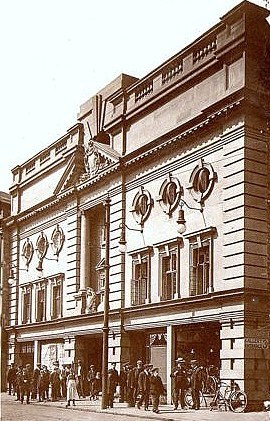 The first Barnsley Gaumont opened as the Empire Palace Of Varieties on 8th June 1908 and soon became Barnsley’s principal music hall. The theatre was designed by North & Robins for the Barnsley Empire Palace Co. and was built at a cost of 17,500 GB Pounds. One of its early managers was Will Smithson, father of the famous musical comedy star Florence Smithson. It stood in Eldon Street and had a seating capacity of 2,500 in Stalls, Circle and Gallery and had 12 dressing rooms. Films were often included on the music hall bills. The last live show was staged on 7th February 1920.

The theatre then closed for several weeks and converted into a picture theatre opening as the Empire Super Cinema on 22nd March 1920 with New Century Pictures as proprietors and seating now for 1,160. The first film shown was “The Cambric Mask”. It was subsequently taken over by Provincial Cinematograph Theatres(PCT) and then in March 1928 by the Denman/Gaumont group. Sound was installed in 1929 and the first talkie was shown on 25th November 1929 - “Movietone Follies Of 1929”. The Empire eventually came under the ownership of J. Arthur Rank’s Circuits Management Association, and was re-named the Gaumont Cinema on 13th May 1950. The Gaumont closed briefly in 1953 for modernisation.

In the early morning hours of Saturday 2nd January 1954 a serious fire broke out in the Gaumont Cinema and the interior of the building was totally gutted. The new Gaumont (later Odeon and currently Parkway Cinema) opened on the same site in 1956 and has its own Cinema Treasure listing.