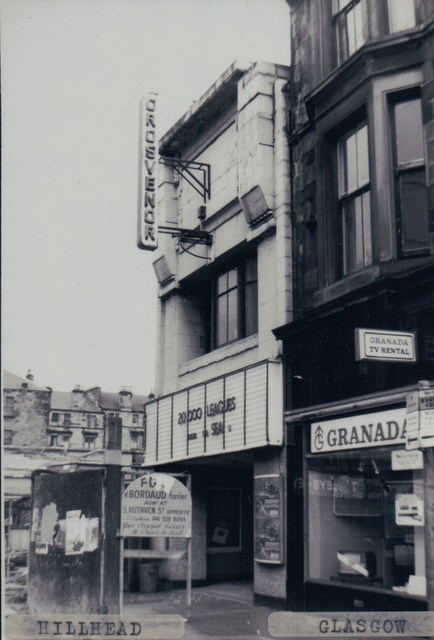 The Grosvenor Cinema opened on 3rd May 1921 with a seating capacity of 1,337. There was a main narrow entrance which had a white tiled faience, located at 194 Byres Road in the Hillhead district of Glasgow’s West End.

Seating inside the auditorium was provided in stalls and circle levels, with a a series of boxes located at the rear of the stalls. When the Grosvenor Cinema first opened it was operated by an independent operator and had a café as an added facility for patrons. Taken over by Associated British Cinemas(ABC) in October 1929, it remained a popular cinema for many years.

ABC sold the Grosvenor Cinema to Caledonian Associated Cinemas in May 1976. They remodelled the cinema in 1980, closing off the original Byres Road entrance (which became a restaurant) and creating a new entrance on Ashton Lane. Two new luxury auditoriums were created in the former stalls area, named the Ashton and the Kelvin. They opened in December 1980 with seating capacities for 276 and 285. In the mid-1990’s plans were proposed to add further screens in the former circle area, but these did not materialise.