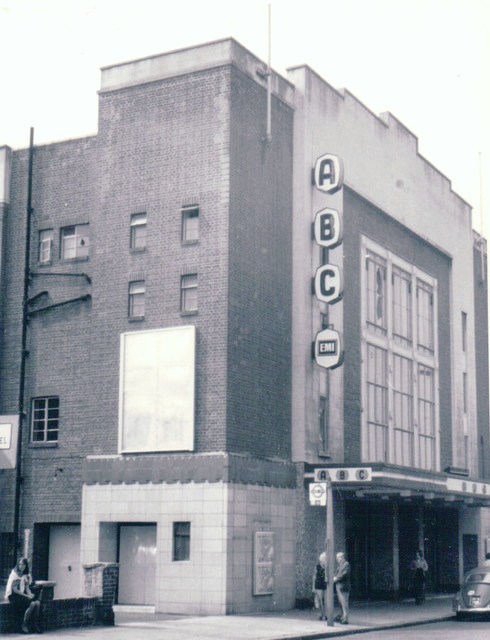 Located in the southeast London district of Blackheath. The Roxy Cinema was a takover of a newly built cinema building by Associated British Cinemas(ABC), hence it was not designed by their usual in-house architect W.R. Glen, but by noted theatre architect Bertie Crewe. It opened on 11th February 1935 with George Arlis in “The Last Gentleman” and Richard Tauber in “Blossom Time”. The exterior of the building had a large central window surrounded by white faiance tiles, behind this was the cinema’s cafe. Seating was provided for 792 in the stalls and 550 in the circle. The proscenium was 40 feet wide, the stage 20 feet deep and there were three dressing rooms.

The Roxy Cinema was closed by war-time damage during World War II and did not re-open until 6th January 1947. It was re-named ABC from 1963.

Showed feature films and a Saturday morning childrens matinee programme of childrens films and weekly serials with cartoons. The children would be called ABC Minors and could earn a club badge through good behaviour and regular attendance. Free entry the following Saturday morning if presenting a birthday card on stage to cinema manager (known affectionately as Uncle) the previous Saturday & being invited on stage to hear the audience sing "Happy Birthday to you". Interval music and games and competitions with a yo yo demonstration by USA experts one week. One week in 1965, UK pop star Billy Fury appeared on-stage to promote his film “I’ve Gotta Horse”.

The ABC was closed on 16th February 1974 with Brigitte Bardot in “The Legend of Frenchie King”(Les Petroleuses) and Leslie Phillips in “Not Now Darling”. The cinema was demolished in April/May 1981 and a supermarket was built on the site. Today this operated as an M&S Simply Food supermarket

A vintage photograph of the former Roxy/ABC, taken in April 1981 during demolition:
View link

A vintage photograph of the ABC in February 1968:
View link