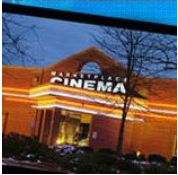 It serves the communities of Vance County,as well as the following:Granville,Warren,Halifax counties and Southeastern Virginia. Now operating with eight screens.

Owned and operated under Marketplace Theatres.

Marketplace opened sometime around 1990 as a quad. It had a two screen addition sometime in the late 1990’s. It is currently a 6 screen cinema.

The Marketplace opened in 1990 as a quad cinema that replaced the Cinema Twin Theatres at Henderson Mall. By the mid-1990’s it added on two more screens becoming a 6-screener and by the early to mid 2000’s added on an addition two screens becoming the town’s first ever multiplex cinema. The Marketplace Cinemas is Vance County’s only multiplex theatre surrounding the areas of Henderson, Warrenton, Oxford, Norlina, and Southeastern Virginia.

It upgraded to digital projection by 2009.

Marketplace Cinemas still has only 6 screens. The now shuttered Mall Cinema only had 1 screen.