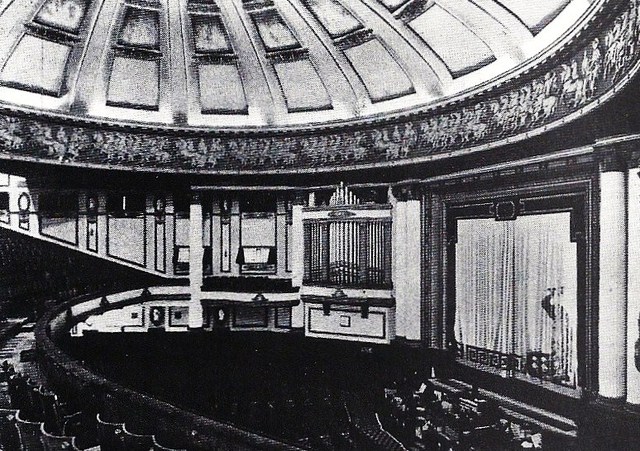 Located in Leeds city centre at the junction of Quebec Street and Wellington Street, by City Square. Opened on 5th June 1922 with Lillian Gish and Richard Barthelmess in D.W. Griffith’s “Way Down East”. Over 50,000 people attended the Majestic Picture Theatre in its first week of operation. It was designed by architects Pascal J. Stienlet of Newcastle upon Tyne and J.C. Maxwell, and built for Leeds Picture Playhouse Ltd.

The Majestic Picture Theatre suited its name entirely. The wide spacious auditorium, with a single balcony seated 2,500 and was richly decorated with wall motifs and an enormous plaster frieze. It had its own symphony orchestra conducted by Francois Grandpierre and a £5,000 grand organ which was built by Messrs Vincent of Sunderland, which had 3Manuals and 33 speaking stops and was opened by organist ‘Davidson’. The projection box was located in the rear stalls beneath the balcony. The cinema also contained a restaurant and there was a ballroom in the basement.

Together with the 1911 Picture House (demolished) and the 1932 Paramount Theatre (later Odeon Headrow closed 2001), the Majestic Cinema was one of the premiere cinemas in the city throughout its life.

It was taken over by the Provincial Cinematograph Theatres (PCT) chain in December 1925, and they were taken over by Gaumont British Theatres in February 1929. “South Pacific” had a 38 weeks run from September 1958, and in 1965 “The Sound of Music” had a long run.

The Majestic Cinema was closed by the Rank Organisation on 10th July 1969, after the Odeon (ex Paramount) had been twinned. The final film was Clint Eastwood in “The Good, The Bad and The Ugly”. The Majestic Cinema immediately became a Top Rank Bingo Club, later operating as a twin when the former Majestic Ballroom was also converted into a bingo club. The bingo club closed in 1996.

In 1997 it became a popular nightclub known as the Majestyk, with another nightclub Jumpin' Jacks located in the former ballroom in the basement.

The Majestyk Nightclub was closed in late-2008, and became a concert venue, with Jumpin' Jacks continuing as a nightclub. Proposals to convert the building into a casino were refused and went to appeal in June 2009.

In 2012 windows were punched into the ground floor level in a refurbishment of the exterior. With many of the original decorative features retained, the main auditorium was renovated and converted into retail units with intent for the building to have mixed uses. The building was vacant, with the retail units not yet leased, when on the evening of 30th September 2014, the former Majestic Theatre was badly damaged in an arson fire which destroyed most of the interior. The outer walls were considered to be safe and not in danger of collapse. In October 2018 construction work began to convert the building into office space within the original exterior walls. Construction work was completed in November 2020 and the building became the national headquarters for Channel 4 television channel in September 2021.

Since 14th June 1993, the Majestic Cinema has been designated a Grade II Listed building by English Heritage.

They used to run great Saturday morning Matinees during the Sound of Music run.

I saw the Three Stooges, Old Mother Riley, Norman wisdom and many other classics. Batman cliffhanger series too.

A kids pop band would entertain us at half time. I remember stamping my feet to Bits and Pieces by the Dave Clarke Five. Great memories :–)

Re Tez contribution. During my time at the Majestic during the run of Sound of Music which was still running at capacity houses at every performance I cannot recall there being Saturday mornings kids shows because we just wouldn’t be able to do so alongside The Sound of Music. Indeed it was very early into the extended run that the box office accountancy was in serious trouble and in consequence inevitable serious deficits. Apart from myself,the other assistant and Lee Prescott the General Manager no one else had a working knowledge of road show advance ticketing which was then quite complex, each and every book of ticket stubs including sold, unsold and half price had to be counted daily and I would guess we were taking advance bookings at least a month ahead of performance dates so chaos was inevitable. The only aid to accountancy we had was an Olivetti hand crank operated adding machine which we bought from the theatre’s 12/6d pw sales deficit allowance. Always drawn but never dipped into because kiosk and ice cream sales were tightly controlled and instead spent in the nearby pub). A pretty useless bit of kit because it was quicker and more accurate to do our sums mentally. No help whatsoever was ever forthcoming from the hierarchy of course, the corporate expression of the day being “The ball’s in your court”, in other words, your problem you sort it. Referring back to the kids matinées, there couldn’t have been live performances by pop groups simply because there were no stage facilities whatsoever, The huge deeply curved Todd-A-O screen was immediately behind the screen tabs and the stalls balustrade, probably a meter at most, with no room whatsoever for even a raised dais. Not withstanding my recall of the period which I believe is accurate any relevant comment will be appreciated of course.

West Yorkshire Fire Service said the “large” fire had reached the roof space of the building.

Flames could be seen shooting out of the top of the premises as firefighters fought to bring the fire under control.

Crews were called to City Square at 19:19 BST after reports of smoke coming from the first floor.

It closed its doors in 2006 and plans to revive the building included a cinema, restaurants and a gym.

By the 1950s the venue was a ballroom and in 1969 the building re-opened as a Top Rank bingo club.

The bingo hall later closed and after a few years empty the building became home to the Majestyk nightclub.

Sad to see the fire at the Majestic Leeds. My grandad Andrew Roberton came from Newcastle to open and manage the Majestic in 1921.

A few videos of the fire.

January 2015 update. The auditorium interior has now been completely removed, along with the remains of the roof, leaving just the outside walls. Difficult to see from outside, but it looks like at least part of the balcony has also been demolished. Photos:–

article about conversion to office space. The rendering show 2 statues on the exterior will reappear.https://www.yorkshireeveningpost.co.uk/news/construction-work-begins-on-40m-redevelopment-of-leeds-city-centre-landmark-1-9006462

Bikerpeter do you remember any more names from that time?