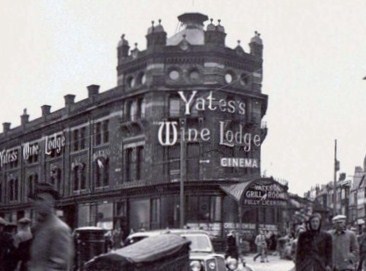 The Theatre Royal opened in 1868 as an assembly rooms and part of the building was in use as a library. The entire building was taken over by Yate’s Wine Lodge in around 1896 with the ground floor becoming their famous bar. The upper section of the building containing the theatre began screening Lumiere’s Cinematograph in 1897. The building was re-named Tivoli Theatre in 1906. In 1909 it became Van Beine’s Theatre, with musical hall/variety and films on display.

Reconstructed in 1912-1913, it became the Tivoli Picture Theatre, with films as its main programming. The interior was reconstructed in 1930, when it was equipped for sound films. It was taken over by the J.F. Emery Circuit in 1948.

On 8th October 1964, a fire destroyed the interior of the cinema at the screen end. Yate’s Wine Lodge beneath the cinema was not damaged. The Tivoli Cinema was re-furbished and re-opened in April 1965, with a reduced seating capacity of 650. Closed in 1972 it became an independent bingo club, known as the Talbot Bingo Club. In 1976 it became part of the Hutchinson’s chain of bingo clubs, named Central Exchange Bingo Club.

In 1977 it reopened as a cinema and in February 1982 with screenings of "Hooper" and "Convoy". 450 new luxury seats had been installed. The cinema was not a success, and closed within a few months. It was later converted into a music hall and by 1991 had become the Music Hall Tavern. Yate’s Wine Lodge bar still continued on the ground floor of the building. In later years the former cinema section was converted into an upmarket nightclub named Addisons. It was finally operating as a lap-dancing club named Wildcats and was re-furbished in early-2009.

In the early hours of the morning of 15th February 2009, the entire building was destroyed by a fire, caused by arson.

I just love our classic traditional cinemas, its a shame they are no longer with us.

This theatre had, to say the least, rather a chequered history. The dates relating to its later cinema days seem to be slightly adrift. The Tivoli , for a while, from 1976, became the Central Exchange Bingo Club (license transferred from premises which occupied the former B.R. Central Station). A year later, in 1977, it returned to cinema use and this continued until either 1980 or 1981. When I passed the cinema in 1980 the attraction (for the Summer Season) was ‘George and Mildred’ with support ‘ From Russia with Elton’, a 42 minute self explanatory documentary. After a couple of weeks into the run, the titles were ‘swapped’ with the 42 minute documentary headlining and ‘George and Mildred’ being billed as the support - not a good sign…..