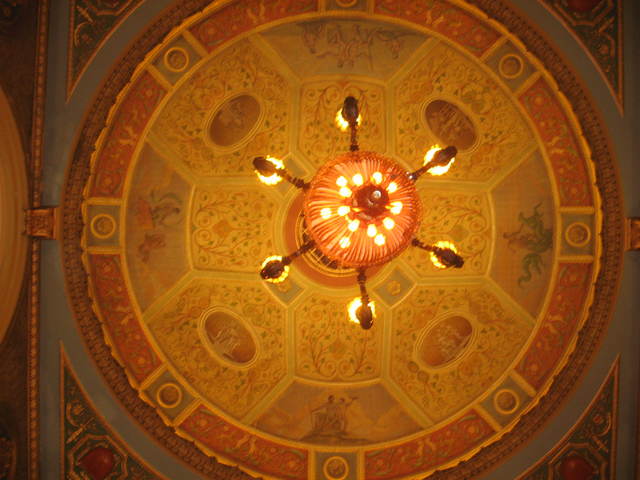 Opened on January 29, 1927, Patio Theatre was one of just a few classic moderately-sized single-screen neighborhood movie houses in Chicago not to have been carved up into multiple screens.

The Patio Theatre is located at the corner of W. Irving Park Road and N. Austin Avenue in Chicago’s Portage Park neighborhood.

The Patio Theatre auditorium has a great Atmospheric style effect with twinkling “stars” and drifting “clouds” in a night “sky”. The theater remained unused since it closed in 2001, but work began on restoration in the summer of 2010, and the Patio Theatre reopened on June 3, 2011. After another period of closure and the building being sold, a new operator took over and it reopened May 7, 2016 with a screening of “Jaws”.

Or, actually, here comes the neighborhood!

Alexander “Alex” Kouvalis – born in 1934 in a regional unit of Arcadia, Peloponnese, Greece …died in Chicago on October 2, 2011 and was interred at Maryhill Catholic Cemetery & Mausoleum in Niles, Cook County, Illinois, USA —————————————— “I know a place where there are electric clouds overhead and twenty-five cent lightbulbs become stars with eyes I see, so it must be true, a dancer of light, a silver shadow who is the keeper of illusions, yours and mine … he dwells in a grand mosaic just west of Austin Boulevard.” … Filmmaker Louis Antonelli wrote that poem about Mr. Kouvalis, and made a 1994 short about his passion for Chicago’s Patio Theatre: “The Wizard of Austin Boulevard.” Alexander Kouvalis, who cared for the Patio Theatre as tenderly as a lover and guarded it as fiercely as Cerberus, was a hero to film buffs for not only keeping the jewelbox of a moviehouse running — but also for refusing to slice up its big screen for a multiplex. Mr. Kouvalis and his family burnished the 1927 Patio at Irving and Austin and re-opened it with a $5 admission, unusual work for a man who immigrated from Greece at age 18 in short pants in the middle of December with no English and went on to become a physicist with four college degrees.

In 1987 Mr. Kouvalis, with some partners, bought the block-long building that houses the neo-Pompeiian Patio as well as apartments and commercial tenants. “It was a mess, but I could see a thing of beauty underneath the dirt,” he said before the June re-opening. “Like ‘My Fair Lady,‘ the beauty was there; you just had to bring it out.” He did it all, from booking second-run films to selling popcorn. He rousted teenage vandals and he was not above patting someone’s pocket if he thought they were sneaking in candy. But he faced hard times in the late 1990s when the city tried to impose additional fees, and the air-conditioning system broke down. He shuttered the Patio in 2001. For years thereafter, the Patio’s marquee said “UNDER RENOVATION.” But Mr. Kouvalis, his daughter Amalia and his son repainted and reupholstered and found a company to fix the Patio’s air conditioning. Mr. Kouvalis bought out all but one partner. Today, the Patio still has its trademark twinkling ceiling lights and a projector that makes the ceiling look like moving clouds. “The fact that it’s still there, doing what it started out as in 1927, that’s a pretty amazing thing,” said Richard Sklenar, executive director of the Elmhurst-based Theatre Historical Society of America. “It’s been on that corner for three generations… . We give him credit for hanging on to it.” When he arrived in the U.S. in 1952 “he thought he saw so many stars in the sky,” said his wife, Magdalena. “Then he found out they were [the lights of] cars.” He had an uncle from the Old Country in Casper, Wyoming, so he went to stay with him. But there he washed dishes from morning until night, or shivered on a truck that delivered ice. Mr. Kouvalis came to Chicago to get an education. He earned a bachelor’s degree at Elmhurst College and three degrees at the Illinois Institute of Technology: a bachelor’s in physics and also in management, and a master’s degree in economics. The U.S. Army came calling, and he was supposed to serve in Japan. But he wanted to be near Greece, so he told a general he was a skilled mechanic who could better serve his new country in Europe. It worked; he was stationed in Germany, and he returned to Greece for a visit. “Alex didn’t even know how to drive the car, and he said he was a car mechanic,” his wife said. “They found out he’s not much of a mechanic.” Later, Mr. Kouvalis worked for Argonne National Laboratory, Sunbeam and Zenith, and he taught economics and real estate at Triton College. At the time of his passing, the Patio Theatre was screening “The Help.” Mr. Kouvalis married when he was 54, because for decades he focused on sending money to his family in Greece, his son said. He helped provide a dowry for his sister, Maria Kostopoulos, and he helped put his brother John through dental school. He met his Polish-born wife when she was visiting a relative in Chicago one summer, and she began working at the Patio. His wake and funeral service were at the Smith-Corcoran Funeral Home at 6150 North Cicero Avenue, with interment following at Maryhill Cemetery in Niles. He was interred with a handmade blanket that his mother, Vasiliki, sent him when he first arrived in America.

I just uploaded a recent picture of the marquee showing damage from being hit by trucks on the corners. The City of Chicago has inspected it and found that it was not a hazard to pedestrians or traffic at this time.

Its sad that people are so careless and selfish when driving. I’m sure the trucks don’t stop and give their insurance information when this type of thing happens.

Plan to restore the Patio on the CBS 2 Morning News today.

Well they better but that plan in motion as soon as possible, because the marquee is getting annihilated https://lh3.googleusercontent.com/-OpTi9lmsZk0/XaDCkh_scTI/AAAAAAAAxtM/q7KxoTjCoDYN23P_8_sR4ugMfnN0VmGiQCK8BGAsYHg/s0/2019-10-11.jpg