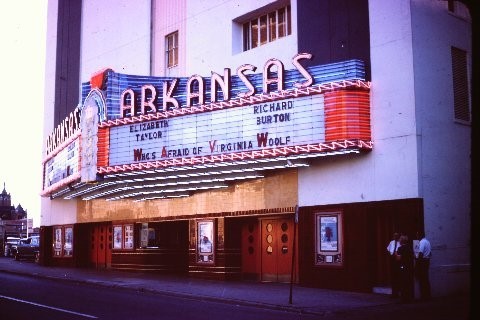 The Kempner Theater was designed in 1910 by New York architect Henry Beaumont Herts of the architectural firm Herts & Tallant. Originally the facade was in a Sullivanesque style, but this was later altered into an Art Deco style, with stucco and ceramic tile highlights. The Kempner Theater was opened September 20, 1910 with the comedy play “Billy”.

The interior was re-modeled in 1921 and on September 27, 1929, the name changed to Arkansas Theatre when it became a full time movie theatre.

Listed as (Closed) in the 1941 edition of Film Daily Yearbook, and also in the 1943 edition when it was part of the Ed Rowley subsidairy of Paramount Pictures Inc., it had reopened by 1950 under United Artists Theater Circuit Inc.

The Arkansas Theatre was closed in 1977, and plans to convert to a performance space came to nothing. It was owned by the University of Arkansas at Little Rock Foundation in 1987, and there was talk of possible demolition.

The last time I passed by the site in May 2009, it was still a parking lot. I didn’t see many pictures here during the 60’s as they mostly played dramas. One interesting fact about this theatre: because it was built as an opera house, it was fairly easy to turn into a movie theater in the 20’s, a true palace! However, in the 50’s with the advent of Cinemascope, they were not able to widen the proscenium (possibly due to the way the opera house was built). Any Cinemascope,Panavision,etc. feature was shown letterboxed on the flat screen much like some movies shown on HDTV and cable TV are today! Saw In Harm’s Way like this in early June 1965.

My sister worked the ticket booth there in the 60’s. Since I worked at the larger Capitol Theater nearby, we would borrow ice when we ran out on busy nights. The Arkansas Theater was much more classy than the others. The lobby had a double entrance balcony that led to the balcony in the house. Very nice.

This opened as the Kempner theatre on September 20th, 1910. Grand opening ad in the photo section.

This reopened as the Arkansas theatre in September 27th, 1929. Grand opening ad in the photo section.