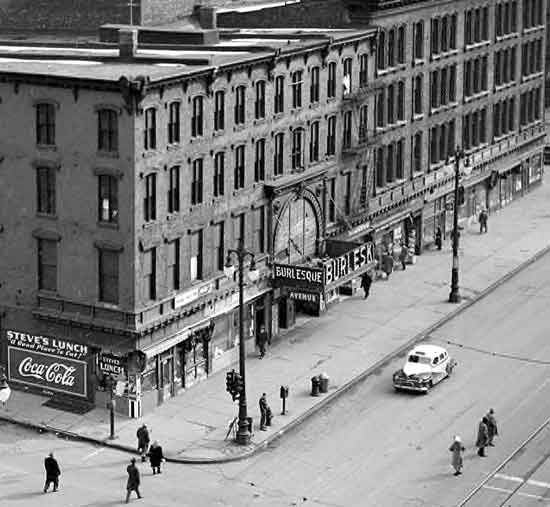 The Avenue Theatre was primarily a burlesque house which had opened by 1905.. It was located on Woodward Avenue at Jefferson Avenue. It is listed in the 1935 Film Daily Yearbook so I assume that it was used as a movie theatre at one time.

The Avenue Theatre operated as a movie house as early as 1916, under the name Triangle Theatre. Here is the item announcing the policy change, from The Moving Picture World, January 22, 1916:

“The Avenue theater, at Woodward and Jefferson avenues, one of the oldest amusement places in the city and for the past three years playing stock, has been leased to the Triangle Theater Corporation by Frank Drew, capitalized at $1,000, the principal stockholders being Pliny P. Craft, Fred M. Randall and Kenneth H. Kolpein. The theater closed with stock at eleven o'clock Saturday night, Jan. 8, and 12 hours later reopened as an exclusive motion picture house playing Triangle films, downtown first run.

“The house manager appointed is James Rutherford, for the past seven months he was assistant manager and press agent of the Miles-Detroit theater. The name of the theater has been changed to the Triangle. Prices are 10 to 25 cents for matinees and 10 to 50 cents at night.”I’ve found mentions of the Avenue Theatre from as early as 1902, but it could well have been operation much earlier, perhaps under a different name. The facade of the building was of an Italianate style that reached its peak of popularity in the 1870s, but could have been built as early as the 1850s. The ornate arched theater entrance and other details look as though they were made of cast iron rather than terra cotta.

I know it was a burlesk at one time. My late Aunt Ruby worked there ca. 1922. I have chorus girl pictures of the time.