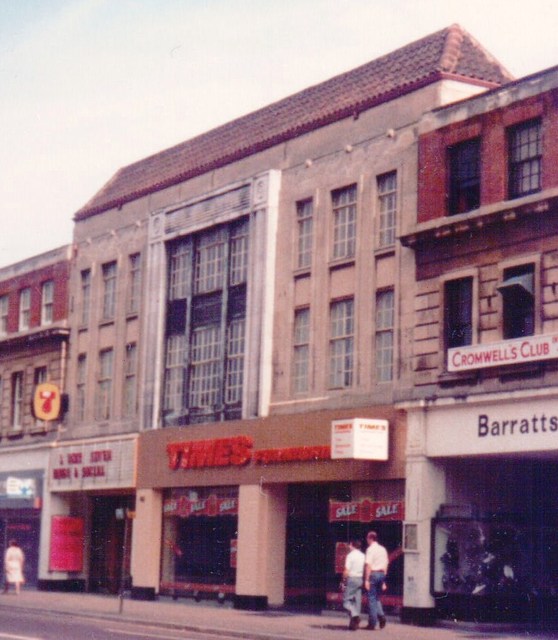 The Carlton Super Cinema was located in the Boscombe district, close to Bournemouth. It was built by an independent company, but was taken over on completion by Associated British Cinemas(ABC). It opened on 27th July 1931 with Dorothy Mackail in "Once a Sinner" and George O'Brien in "Fair Warning".

Designed by architects Reynolds & Tomlin in an Oriental Chinese style, the light fittings in the auditorium were said to be a particular feature. Seating was provided in stalls and circle levels. The proscenium was 30 feet wide and a cafe provided an additional facility for patrons.

In early-April 1971, it was re-furbished in the stalls area, to become a ‘luxury lounge’, with new seating installed in this area, and the circle becoming un-used. It re-opened on 29th April 1971, as the ABC with Frankie Howard in "Up Pompeii". The ABC closed on 10th July 1974 with Joseph Bottoms in "The Dove".

The building was converted into a Ladbrokes Lucky 7 Bingo Club and this use continued until it was closed in 1988. The building then lay empty and derelict for ten years.

The entrance and foyer of the building were converted into a pub named the Mello Mello Bar. An adjacent store next to the entrance became a pub for the J.D. Wetherspoon chain. It opened on 19th May 1998 and was known as The Sir Percy Florence Shelly. By 2017 it had closed. The Mello Mello Bar remains open. Sadly the abandoned auditorium lay derelict for several more years and was demolished in around 2002. The stage fly-tower remains.

The auditorium was demolished during the summer and autumn of 2002. Many were glad to see the back of it as it was an “eyesore”. It was a sad state of affairs that what was at one time a grand building had been allowed to fall into such a sorry state. It had become a shelter for rough sleepers and a safety hazard. I saw some pictures of how it was on the inside before the demolishion men moved in and gutted it prior to knocking it down. In the former circle there was still rows of seats in place and its unique Oriental style decor was still very much in evidence albeit with peeling paint around the proscenium and walls. Sadly the screen had long since gone but the guy who took the photographs said that there was several pulleys behind the stage, which probably worked the screen tabs – no trace of those either I am sorry to say!

I think this cinema should be reallocated under Bournemouth….. Boscombe is just a suburb and the Astoria and Classic are further out east of the town centre then the Carlton.

I got photos from 1988 when it closed, took some of the projection box, rewind room and dimmer cables that went in the roof. i know some guy who lived in christchurch that showed me what it was like then. that was 23 years ago.

There seems to be some doubt as to whether the Wetherspoon pub occupies any of the former cinema space. The cinema entrance was to the left of the pub (where Mello Mello Bar is in my photo) and the auditorium presumably stood behind all these street-fronting buildings. So what part of the cinema does the pub occupy? Interestingly, at the rear, there’s what seems to be a derelict backstage area (see my photos), sitting all alone! Was this part of the cinema?? Any thoughts and comments would be most welcome!

Lucky 7 Bingo & Social Club was a trading name of Ladbroke’s.