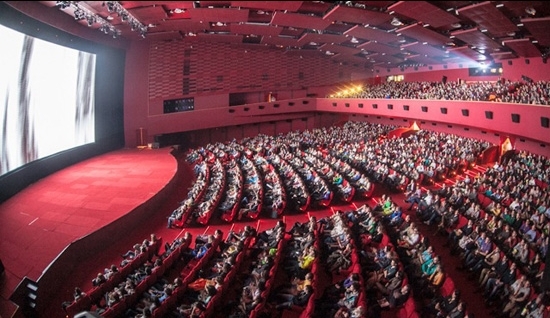 The Oktyabr Kino (October Cinema) opened in 1967 to commemorate the 50th Anniversary of the October Revolution. Along its roofline façade is an elaborate marble mosaic depicting scene from the Revolution. Designed by architects, Posohin, Popov & Mnfayants as a purpose-built twin screen cinema, with the the main auditorium having 2,450 seats in orchestra and balcony levels and 442 seats in the small basement cinema. The main auditorium was equipped with Stereo 70 projection (70mm 3D).

It is operated by the Karo chain of cinemas and is one of the host cinemas of the Moscow Film Festival. Occasionally American and British films are screened in the smaller screens, in their original language, with Russian sub-titles.

On July 25, 2010, Angelina Jolie appeared in person at the Oktyabra Kino for the Russian premiere of the spy thriller “Salt”.