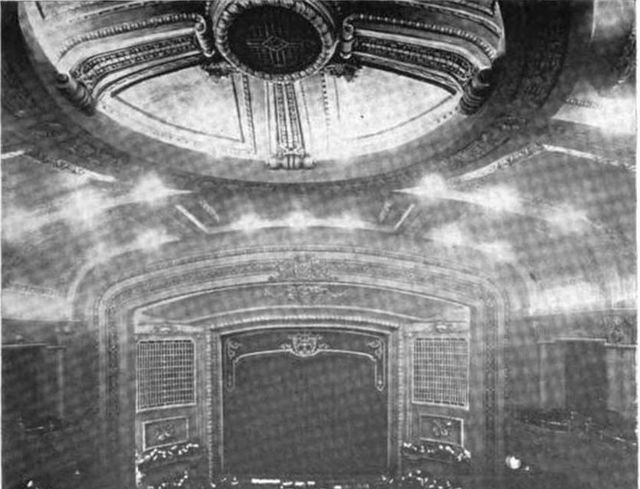 The Strand Theatre was located on State Street in downtown Erie, and opened in 1915. It was operated by the Rowland and Clark Theaters chain. In the early-1940’s it was operated by Warner Bros. Circuit Management Corp.

In 1948, Stanley-Warner built a new 980 seat Strand Theatre on W. 10th Street (today it operates as the Erie Playhouse) and the original Strand Theatre was closed and was demolished.

None of the comments on this page so far apply to the original Strand Theatre, which has not become the Erie Playhouse, and was not designed by Victor A. Rigaumont. It was designed by the noted Buffalo, New York architect G. Morton Wolfe, who designed at least two theaters in that city.

The Strand in Erie was operating by 1916, when these two photos of its auditorium appeared in a portfolio of Wolfe’s work that was published in the August, 1916, issue of the trade journal The Ohio Architect, Engineer and Builder. So far I’ve been unable to find a photo of the exterior of the original Strand.

Jeff, the view in the old photo is from 10th Street toward 9th Street, so if the candy store was in the white building next to Grant’s, the Strand’s address would have been a smaller number than the candy store’s. But the photo shows that the first Strand was definitely in the 900 block of State Street.

The lots in between are occupied by what looks like a single modern building with a Rite Aid and a store called Thrifty Shopper. From its location on the block, I’m pretty sure the Strand was somewhere in the footprint of this building.

The building’s address is 914-916 State, and I found an Internet listing for Rite Aid at 916 State. The Thrifty Shopper has closed since the Google camera truck went by and I can’t find an address for it, but it must be the space for lease at 914. It looks like they’ve renumbered all the lots, since Rite Aid’s entrance is closer to 10th Street than it is to 9th Street.

The Strand’s historical address was probably about 920, but the address today could be 914, or 916. Still, I’m not sure if the Strand’s old building is in this remodeled cluster or not. Alteration has been so thorough that even if a wall or two of the Strand is still in there, it would probably be unrecognizable as such. If the Strand has not been completely demolished, it has probably been virtually demolished.

Joe: You are correct about the address. I thought about that after I posted. I was counting in the wrong direction. The building with the Rite-Aid store was originally the G.C.Murphy Five and Dime. When the new Strand was built in 1948, the old one on State was totally demolished and replaced with Murphys. It is built in the Art Moderne style, which was popular in the late 40’s. It could not have been built in 1925. The Pulakos candy store remained until redevelopment took it in 1964.

The September 8, 1915, issue of The Music Trade Review had this item: “A $75,000 moving picture theater, which will be known as the Strand, is being erected on State street, Erie.”