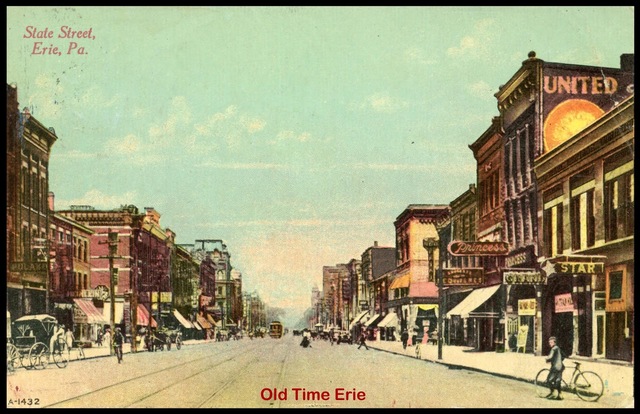 The Princess Theatre was opened around 1912. It is listed in both the 1941 and 1943 editions of Film Daily Yearbook as (Closed).

By 2013 it was part of the Plymouth Tavern & Restaurant.

Address of The Princess Theater was 1109 State Street. It was part of “Theater Row”. The building where the Princess was located is now part of the Plymouth Tavern. There were also 2 theaters on Theater Row… The Star and The Grand. As a child growing up in the 50s, I remember that the building still had part of the marquis over the front…It was right next door to Perry Beauty Supply.

This web page at Old Time Erie has a ca. 1912 postcard view of the 1100 block of State Street, with the three small houses of “Theater Row” on the right: the Princess at 1109, the Grand at 1111, and the Star at 1113. The Princess is the only one of the three that remains on this 1918 list of Erie’s theaters, but the buildings all three houses occupied are still standing in 2014.

Out of camera view is 1115 State, which, on the 1918 list, is the address of a house called the Nixon Theatre. I don’t know if the Nixon was in operation when the photo was made and just didn’t get included in it, or if it was opened after the photo was made. The Nixon might have been the house later known as the State Theatre, which we have listed at 1117 State.