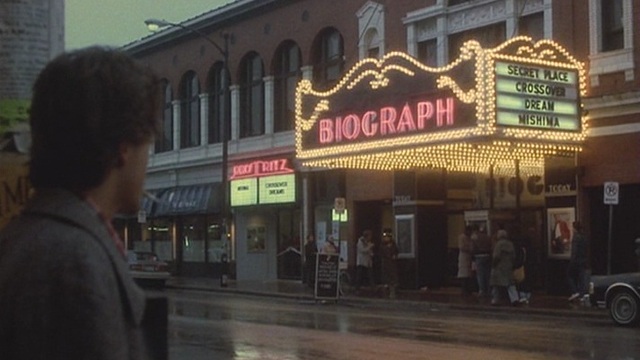 The Biograph Theater was opened September 5, 1914. All 942 seats were on a single floor and was equipped with a Weickhardt organ. This Lincoln Park neighborhood landmark is probably best known by Chicagoans as the place where John Dillinger was shot and killed on July 22, 1934 after attending a screening of “Manhattan Melodrama” starring Clark Gable (allegedly the ghost of Dillinger has haunted the theater ever since).

During the 1970’s, the second floor of the building was converted into two small additional screens. The original décor in the original main auditorium mostly lost, the historic Biograph Theater continued to show movies until 2001.

The theater reopened in 2002 under the Village Theatres chain, which operated it until September 2004, when it again closed.

The Biograph Theater was purchased by the legitimate Victory Gardens Theatre company in 2004. The interior has been entirely rebuilt, from a venue which could originally seat over 900 to 299 today (which is about 100 more seats than Victory Gardens' old space down the street, which will now be rented out to other area theater companies). The facade was repaired and cleaned and the marquee was rebuilt to resemble it’s original apperance. (The words “Victory Gardens” have replaced the word “Essaness” over the neon-lit Biograph name, Essaness being the chain that operated the movie house during the 1930’s.)

The Victory Gardens Theater at the Biograph was opened on September 28th, 2006, with Charles Smith’s drama, “Denmark”. By 2017 it had two auditoriums, one seating 259, the other with 109 seats.

They may have scouted his movements from the roof, but it’s pretty well documented that agents shot him from street level. As he was shot in the back with a bullet exiting his eye.

I checked the newspaper movie section for July 22, 1934. The Fullerton Theatre is not listed. That’s because the building at 2424 N. Lincoln was an auto garage at the time. Here is a video clip in which this man mentions the address of the former movie theatre at 2424 N. Lincoln Avenue (that would later be reborn as a movie theatre; first called the Crest and then 3-Penny Cinema).

It says Fullerton Theatre on the Wikipedia page for Lincoln Hall.

From the 2424 N. Lincoln Wikipedia page: “The building first opened as the Fullerton Theatre, a nickelodeon, in 1912. In 1915 it was converted into an auto garage. FBI agents took aim at John Dillinger from the roof of the building in 1934.[1]

The Biograph Cinemas phone number during the 80’s (and probably earlier) was 348-4123. See posted ad in “Photo” section.

Photos added of one time Biograph owner Jack Cooney. Below is Roger Ebert’s July 13, 1967 interview with Cooney. Via Tim O'Neill.

Thanks to Tim O'Neill for the full Chicago History Museum of 1967 & 1974 Biograph photos.