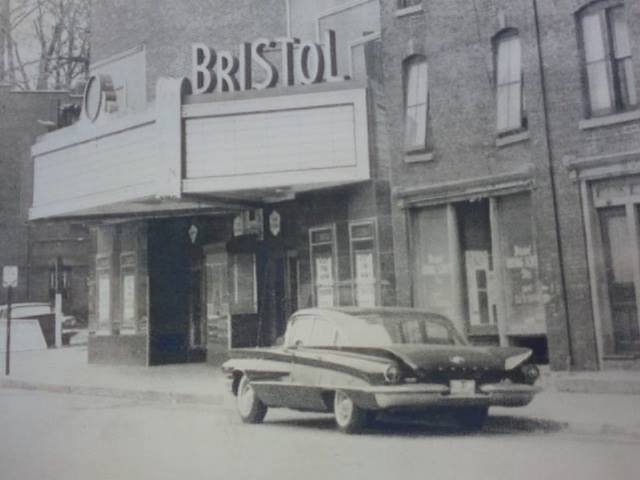 The Bristol Theatre was located in downtown Bristol. Designed by architects John & Drew Eberson, with Herman Maier supervising construction for Warner Brothers. Seating was provided in orchestra and balcony levels.

There were two theaters on this site. The original Bristol Theatre burned down in 1939. Boxoffice of October 19, 1940, reported that Warners would open the new Bristol Theatre on or shortly after October 18. The new theater had been designed by John Eberson.

It turns out that the Bristol Theatre had a late aka, though it might have lasted only a year or so.

Stanley Warner operated the Bristol Theatre until some time in 1977 or 1978 (the last mention of it as an operating SW house I’ve found is in Boxoffice of January 17, 1977.) After they closed the house, it was taken over by a local physician and movie buff, Dr. Brian Hennessey, who remodeled and reopened it in late 1978 as a cinema dinner theater. Dr. Hennessey’s plans were noted in Boxoffice as early as May that year, but the opening was long delayed. Boxoffice of October 23 said that the Carberry Cinema Classics Dinner Theatre had finally been opened. Seating had been reduced to 298, and the first movie shown was the Marx Brothers' “A Day At the Races.”

Though a November 27 Boxoffice item indicated that the theater had gotten a positive public response, I don’t think the house remained open very long. The last mention of it in Boxoffice is from January 1, 1979, in an item saying that Hennesey had named Sean Sullivan manager of the operation.

I’m thinking the Carberry Cinema Classics Dinner Theatre was a later incarnation of the nearby Carberry Theatre rather than the Bristol Theatre.

That would certainly make mores sense, Roger, but Boxoffice said it was the Bristol (item two, left hand column under heading “New Britain”) and said the same a second time (first item, right had column) and then a third time (right hand column, second item from bottom). I’ve been unable to find the item from May, 1978. The magazine might have garbled the information, of course.

Hmm. I see what you are saying. Over on CinemaTour I have the Carberry Dinner Theatre listed as an aka for the Carberry, but not sure where I found that information. I’ll have to do further research.