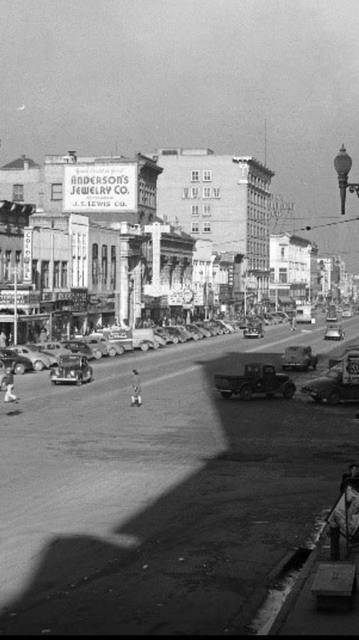 The Colonial Theatre opened in a former converted women’s store on Thanksgiving Day 1923. H.E. Skinner, the manager, said in the Ogden Standard that ‘he was interested in building a feature house that would justify a five or seven day run for big features’.

The opening attraction was Marion Davies in “Little Old New York”. Prices were 10-25-35 cents; children not admitted in the evening unless accompanied by parents. In later years it showed mainly B pictures, westerns and second runs, leaving the more important fare to the Egyptian Theatre, Orpheum Theatre and Paramount Theatre.

In the late-1930’s it was closed for a while but opened up again on Christmas Day 1938, as a replacement for Paramor Theatres closed Lyceum Theatre. But by 1940, the Film Daily Yearbook listed the house as closed again. It seemed to have a spotty record– sometime closed and sometimes open– but appeared to have a good run during the war and a few years after.

Beginning in 1947 three new drive-in’s sprang up in the Ogden area. This was in addition to a new theatre in nearby Roy and the new Country Club Theatre, in the incorporated city of South Ogden, which was two miles from Ogden’s downtown area. Ogden exhibitors petitioned the city commissioners to have the city regulatory license fee reduced. They said they went along with the tax during the war because of full houses but now attendance was decreasing and the drive-ins and theatres, located in the county district, had a smaller tax burden while taking business from the city theatres. This was in addition to federal and state taxes, which were imposed. The city commissioners agreed and reduced the fees from the wartime peak of $400 to the pre-war tax of $200.

Boxoffice magazine said in the late-1940’s that Ogden theatres were especially hit hard because of the post-war closing of defense related industries in the city. That and the inroads of television probably contributed to the demise of the Colonial Theatre, which may have closed on May 29, 1949, when its last advertisement appeared in the Standard-Examiner.

The Film Daily Yearbook of 1950 did not list the Colonial Theatre and in September of 1950, it was announced that a ladies shoe store was opening in the remodeled location. The building was later demolished and a high-rise office stands at the location today.

1940 photos added courtesy of Rod Nelson. Colonial Theatre on the far left in one, that may need to be downloaded & enlarged for better viewing.