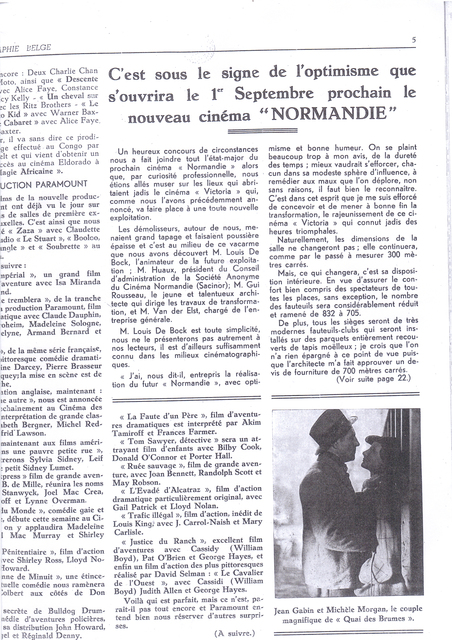 Opened before 1920 as Victoria Concert Hall, then Victoria Cinema under the same direction as the Monnaie Cinema behind the Brussels Opera, the so called Theatre de la Monnaie.

In September 1939 it became Normandie Cinema, a tribute to the Parisian Cinema, the Monnaie Cinema became Studio de L'toile. There is also reference to a Parisian Theatre in 1952 and 1953 which was part of Pathe circuit, including Pathe Palace and Marivaux “Jeux Interdits” was shown there first run. It became independant again, Alfred Hitchcock’s “To Catch a Thief” was showed there as a second run in 1956. On the 1st December 1957 it was destroyed by a fire, recorded in the newspaper ‘Le Soir’ of 2nd December. One of the last film showed there was “Loving You” with Elvis Presley, it was then totally demolished, a commercial gallery was built on the site.