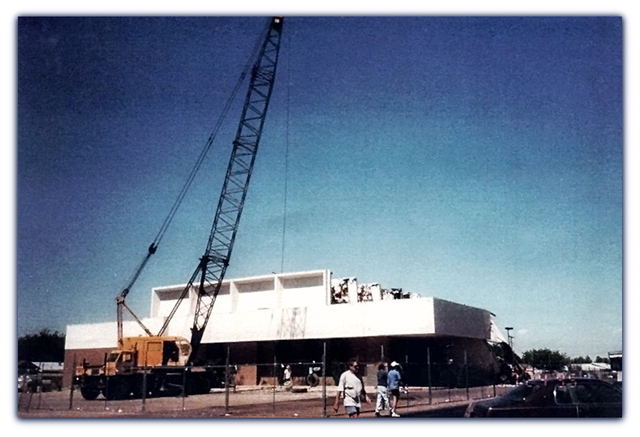 Argene Hodge proudly opened the fantastic new Grandview Cinema November 21, 1968 with Richard Harris in “Camelot”. Mr. Hodge relocated to Odessa in 1957 assisting Mr. Collins in the H & H Theatres chain and eventually took over operations of Hodge Associate Theaters. Over the years he also had a hand in the Ector Theatre, Lyric Theatre and Broncho Theatre operations.

The Grandview Cinema, then under construction, was described in an article in Boxoffice Magazine’s issue of July 22, 1968. The 85 foot wide auditorium was to have 838 plush, reclining seats in rows four feet wide, a 55 foot wide screen, gold drapes, sea green carpeting, and a color scheme of blue, russet, and burnt orange for the seat upholstery.

The house would have 35 and 70mm Simplex projection equipment, and there would be 17 Altec speakers in the auditorium. The 140-foot long lobby-foyer area would feature more sea green carpeting, and had vaulted ceilings and a 20 foot chandelier. In lieu of a marquee there would be a fifteen-foot overhang along the glass front of the building, and a ten foot overhang along the sides, adjacent to the two acres of parking. The would be a double-sided attraction board 8 feet by 42 feet placed near the main road, about a block from the theatre.

The Grandview Cinema was designed by architect Bob Peters of the Odessa firm Peters & Fields.

Grand opening ad at View link
You can also see the Warner theatre listed in New York City on the bottom right. They must had copied an New York ad.

From 1995 a view of the Grandview under demolition.

I posted that grand opening ad in the photo section.