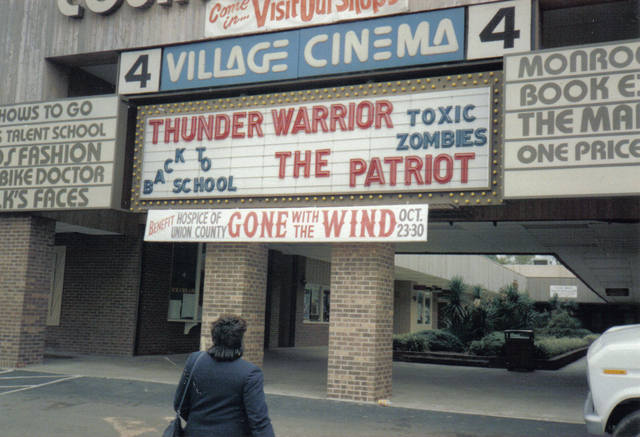 This twin theatre was located in the Union Village Shopping Center and was opened February 28, 1975 as the Village I & II Theatres under Charlotte based Consolidated Theatres. It was the first ‘modern’ theatre for the area in over 30 years. The shopping center was built over Bearskin Creek which caused numerous problems for the tenants including flooding. By 1983 it was divided into four screens.

The theatre was closed in 1990 when Consolidated Theatres built a new 8-screen theatre about one mile west on Roosevelt Boulevard, across from the Monroe Mall, which opened the following year. The shopping center later completely remodeled so as to uncover the creek which now separates the retail strip into two parcels.

Union Square Cinemas are indeed located across from the mall, only across Dickerson Boulevard instead of 74. (in other words, across from the ‘side’ of the mall) I never attended the Union Village Cinema but remembered seeing it in 1989. I was going by the 1977 Mullin-Kille Monroe City Directory which has it as “Village Twin I and II”. Actually, looking at an ad for the theatre from 1984 shows 4 screens! Must have started as a twin and then each auditorium split??

At the time of this 1986 photo it was a four-plex.
View link

Don’t like all those Stores on the front of the marquee.

AS THE VILLAGE I & II THEATRES SEATING CAPACITY

Went from two to four screens by 1983 with the original twin was divided into four sections.

The grand opening full-page ad appeared in The Enquirer-Journal on Feb. 27, 1985 (smaller ad on Friday, Feb. 28). The two films to play for the opening were “The Towering Inferno” and “Gone in 60 Seconds”. Would be interesting to know how those did – probably quite well! There is no need to post the ad here as the microfilm that it was found on just isn’t very good. I have removed two comments that I made at this theatre, one was for clearing up who built this theatre (Consolidated). The other commenter(s) removed their comments – this left mine simply ‘hanging’ and with no real purpose.

VILLAGE I-Irwin Allen’s THE TOWERING INFERNO with Paul Newman and Steve McQueen that was the TOP grossing boxoffice picture of 1974 and it held that title between the timeframe of February through June of 1975 when “Jaws” dethroned it. Original released at Christmas of 1974

VILLAGE II-“GONE IN 60 SECONDS”-Was really popular as a huge sleeper hit that year. The reason why this independent actioner became successful was that it was the first motion picture to have one of the great “car” chase scenes ever put on film…surpassing “Bullitt”,and “The French Connection” as one of the top ten chase scenes ever!!!….During production…a total of 93 cars were damaged in some scenes including its infamous “freeway' scene…..the 1974 original,not that Angelica Jolie bull.

It did even better with its coming attractions……

THE SEVENTH VOYAGE OF SINBAD

Roger Moore as James Bond in MAN WITH THE GOLDEN GUN

I believe this theatre should be labeled as “demolished”? As of today’s date, the history of this theatre posted here indicates that it was closed in 1990, an assumption at best. I do not know if I wrote that year when I first added the Union Village Cinemas to this web site in 2009 or not as the history has been modified [by others]. I will double-check Monroe’s city directories & post another comment only if I find better proof of the closing year.