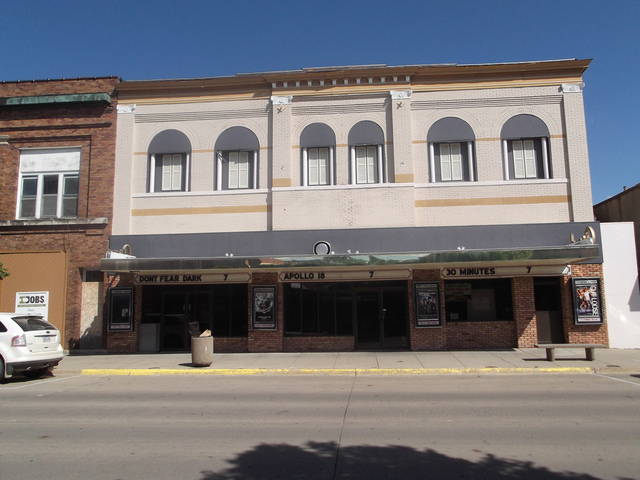 The Grand Opera House was opened prior to 1903 and was designed by Chicago based architect Col. E. Young. It was remodelled in 1936 to the plans of architectural firm Liebenberg & Kaplan. By 1941, it was operating as the Perry Theatre, and continued into the 1950’s with 700 seats. Since renamed Grand Theatres 3, it is located in downtown Perry, at the intersection of 2nd Street and Lucinda Street.

This theater was in operation as the Grand Opera House at least as early as 1908, when it was mentioned in issues of The Billboard. The building is recognizable in this postcard, which has a 1912 postmark on it. The ground floor has been altered, but the upper part of the building is largely unchanged, except for having been painted and having had the windows altered.

The Grand Theatre mentioned in the January 3, 1928, issue of The Film Daily is probably this house:

“Perry, Ia. — Youngclass & Latta, owners of the Foxy and Grand here, have bought the Strand at Woodward. They are planning a circuit in this territory.”

The Grand Opera House was listed in the 1913-1914 edition of Julius Cahn’s guide as a ground-floor theater with 769 seats, but was not listed in the 1901 guide. I’m not sure if the other theater mentioned in the FD item was actually called the Foxy, or of that was a typo for Roxy.

The finding aid for the Liebenberg & Kaplan papers at the University of Minnesota has several references to theater projects the firm undertook in Perry, Iowa, including an entry specifically naming the Perry Theatre, dated 1935-36. That was probably when the ground floor facade was modernized.

As some of the entries have no theater name attached, Liebenberg & Kaplan might have worked on the other indoor theater in Perry as well. As it turns out the other theater was indeed called the Foxy, at least for a while, the former Rex Theatre having been renamed about 1927.

There is also one entry for a Perry Outdoor Theatre in Perry, dated 1947, so the firm must also have drawn the plans for the drive-in that once operated there. Drive-ins.com says it was called the Corral Drive-In.

The article Tinseltoes linked to confirms Liebenberg & Kaplan as architects of the 1936 remodeling job.

An NRHP document about Iowa theaters says that the Grand Opera House at Perry was built in 1903, and was designed by a Chicago architect listed only as Col. E. Young. I’ve been unable to find anything else about him on the Internet.

The Grand Theaatre 3 is now operated by Spotlight Theatres. website