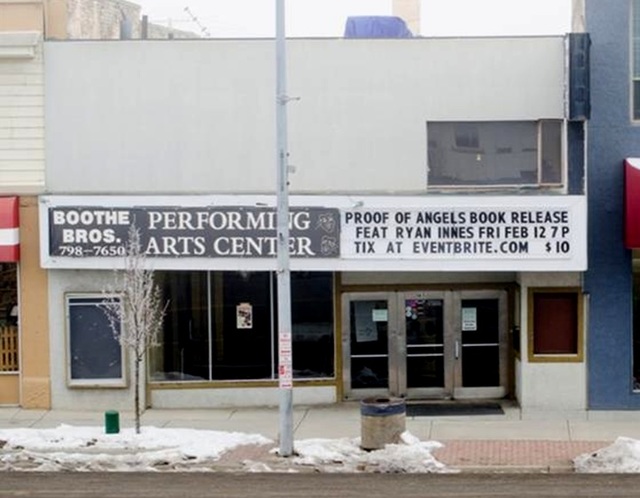 Listed as the Angelus Theatre in business directories, it opened September 9, 1912. This house was Spanish Fork’s only movie theatre when it was destroyed by fire in 1948. The theatre’s operators, the Huish-Gilhool circuit, rebuilt the Angelus Theatre on the same site, and it was reopened in 1950.

The Angelus Theatre was renamed Main Street Movies about 1984. No closing date for the house as a movie theatre is given, but by the early-21st century it was operating as the Royal Palace Theatre, presenting live music performances.

More recently, it has been operated as a live music venue under the name Boothe Brothers Theatre by the nearby Boothe Brothers Music Center, a retail store. By 2017 it had returned to its original Angelus Theatre name.

In the 1942-43 Motion Picture Almanac is a listing for Huish Theatre Enterprises, 1426 Harvard Ave, Salt Lake City; C.E. Huish, president. This circuit controlled 2 theaters in Elko NV, and 11 theatres in various Utah towns. One of these was the New Angelus Theatre in Spanish Fork.

The architect for the rebuilding of the Angelus Theatre was Fred L.Markham, who also designed the Arch Theatre and several other projects for the Huish circuit.

This has been renamed the Angelus Theatre.