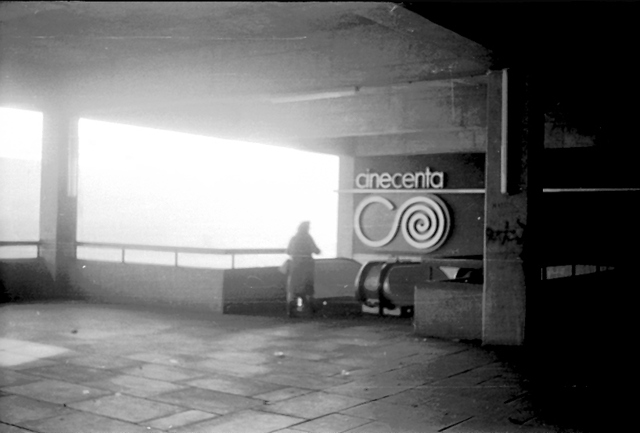 The Cinecenta Twin cinemas opened on 30th January 1969 located in the Pond Street development in the city centre, below the Fiesta Nightclub. This small circuit of cinemas was operated by Leslie Elliott of the Compton Cameo Group of Companies and the policy was to show films which the major circuits did not show, which of course meant that most of these films carried an ‘X’ certificate.

Entrance to the cinemas was by escalators up from the lower Flat Street or down from Arundel Gate above through aluminium framed plate glass doors with the pay box on the right hand side of the small foyer. Parallel staircases were situated to the left. The outer staircase led to Cinecenta 1 seating 144, the inner one to Cinecenta 2 with was the larger of the two auditoria, seating 190. Two small projection rooms were built using the mirror periscope system with Phillips FP20 projectors.

In March 1969, Cine 2 became a private members club known as the Penthouse CineClub showing uncensored films, payment being made at the main paybox. A second paybox was opened up on the stairway to Cine 1 for patrons of this cinema. By October 1969 both screens were ‘Members Only’ cinemas but in October 1971 Cine 1 reopened to the general public. This situation continued for ten years, then in September 1981 both cinemas were members only again.

The following year in October 1982 these restrictions were lifted with both screens open to the general public. Late in 1980, the Leeds based Star Cinemas chain took over control of the small Cinecenta circuit, with the Cannon Group acquiring the Star Cinemas chain in 1985. In 1986 the cinemas were renamed the Cannon Flat Street Cinemas (Flat Street had to be added as by now Cannon had taken over the prestigious ABC 1 & 2 Cinemas in Angel Street and renamed them Cannon 1 & 2 Angel Street) and both cinemas began to show films on general release.

Cannon closed the Flat Street Twin’s in early-1989 having already closed the Angel Street cinemas the previous year. Eventually, Rank Theatres who had taken over the running of the Fiesta Nightclub above for a short while, acquired the lease and reopened the cinemas as the Fiesta Twins in August 1989. They closed the two cinemas in September 1991 and incorporated them into the Odeon Cinema complex which they had by now opened up in the former Fiesta Nightclub and in early-2009 remain open as such, becoming the Odeon Luxe in November 2018 with reduced seating capacities. (It has its own page on Cinema Treasures-Odeon Luxe Sheffield).

Are not these theaters already listed here – /theaters/25309/? The headnote there mentions that that the Fiesta Twins were incorporated into the multiplex.