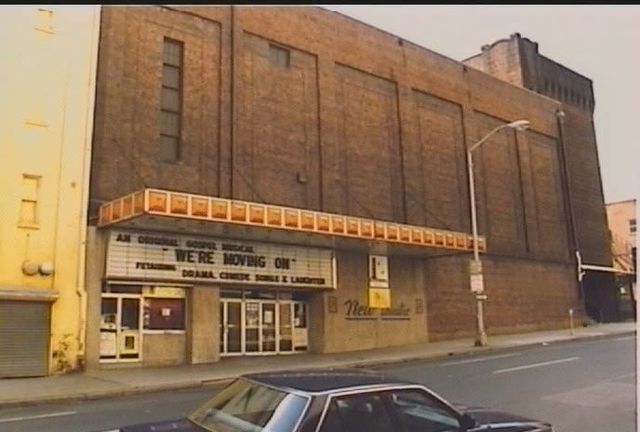 First opened on December 17, 1910, the now-ironically named New Theatre is one of the oldest theaters in Baltimore.

It could seat 1,400 originally and was decorated in highly ornate Beaux-Arts style. Designed by architects A. Lowther Forrest and Oliver B. Wight.

The New Theatre had two small balconies, side boxes and a stage with an proscenium arch with elaborate plasterwork.

In 1921, the theater was remodeled for the first time, followed by more remodelings in 1929, 1935, and 1946. The last one, by architect Armand de Cortieux Carroll, destroyed all that remained of the New Theatre’s orginal decor, including the removal of the two balconies and their replacement by a single larger one to give an increased seating capacity of 1,800.

Modernized one last time in the late-1960’s, its main entrance was switched from West Lexington Street to Park Avenue.

The New Theatre was shuttered in September 1986 and afterwards served for a number of years as a clothing store. In 2002, the former theater was scheduled for demolition to clear the way for a renewal project of the area. Demolition finaly came in April 2010.

You all forgot the fire that extensively damaged the original Lexington St. lobby, circa 1967. That’s what caused the entrance to be moved to Park Ave., while the old lobby was sealed off and converted to retail.. The auditorium was given a bland, mostly white color scheme.

In the 1990s, the building was occupied by New York Fashions, which reconnected the the old lobby area to the former auditorium. Part of the upstairs concourse was still visible in the store.

DEMOLITION IS UNDERWAY at the New!! One corner of the building – to the left of where the screen was – has been removed; from the rear (Clay St.) you can see part of the balcony, the upper surround speakers, and the booth apertures. Sad sight to see, folks…

Another corner – this one in the rear left – was opened this past week, as the several buildings to the west of the New were leveled. The original Lexington St. lobby is gone. Only things standing on that end of the block is the corner building and what’s left of the New’s auditorium.

From Clay St. you can see that the projection room holes were recessed into the ceiling. Was that ceiling lowered during one of the New’s several remodels?

I hope this works…I took some pics today of the New’s destruction, then resurrected my rarely-used MySpace page to create this album:

There’s also one picture of the Howard in its current state.

I worked there as an usher during the Sound of Music run. I just loved it there. All kinds of nooks and crannies to explore. It was always so difficult for people to navigate up the balcony stairs in the poor lighting. I wish it had been preserved.

The first James Bond film (“Dr. No”) opened at The New, sometime in the spring of 1963. While I was watching the film (it was a matinee showing) there was a problem, either with the projector or film, and the theater had to refund our money as it couldn’t be immediately fixed. I had to return, another day, to see the complete film.

It was 50 years ago today that “The Sound of Music” premiered at the New Theatre. With a reserved-seat run of 91 weeks, it’s almost certainly the long-run record holder for this venue. (Anyone know of something that ran longer?)

“The Sound of Music” also was, I believe, the first of two consecutive Julie Andrews movies to play this venue between 1965-67. That 26-month period would’ve been bliss or hell depending on whether or not local moviegoers were a fan of Julie!

A $10,000 Moller pipe organ was in installed in 1917. The property is still vacant, and is in the hands of the mega corp Superblock LLC a public private business venture, being held hostage for unknown reasons.