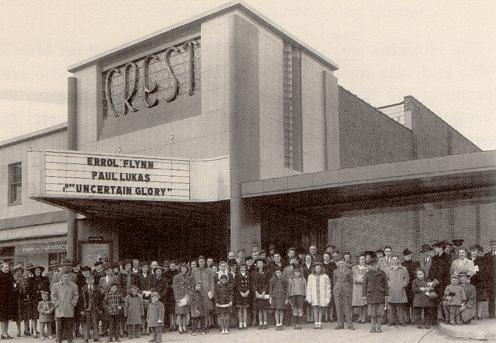 The building still stands! Stripped of it’s grandeur its serves as a meeting hall for the local catholic church.

This opened on March 9th, 1942. Its grand opening ad can be found in the photo section for this theatre.

The EXACT address for this building, currently a church, is 807 E Newport Pike, Wilmington, DE 19804

The July 3, 1941 issue of Film Daily had this item about the proposed (but not yet named) Crest Theatre:

“Wilmington, Del.— Benjamin Shindler, manager of the Ace Theater, has announced that construction of a film theater to cost more than $100,000 will be started within a few weeks at Boxwood Road and Maryland Ave. in suburban Crestwood.

“The property in Crestwood was purchased recently by Shindler, and an initial survey was immediately started.

“House will seat about 800, Shindler said, and will incorporate every modern design of theater construction. It is planned to have the theater ready for opening in the Autumn.”