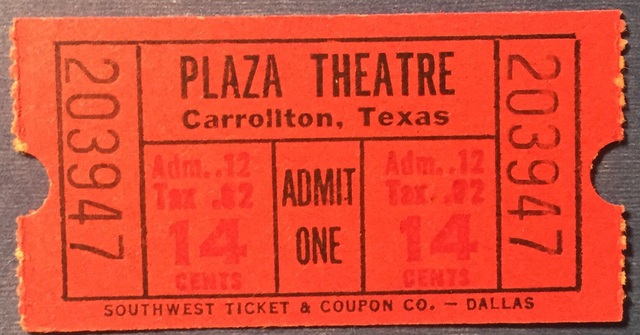 George Myers opened the 270 seat Myers Theatre on December 14, 1928 on the west side of Carrolltons’s town square.

The new Plaza Theatre has been beautifully restored and preserved.

In the 1920s and 1930s, George F. Myers was everything to the, then, small town of Carrollton, Texas. The grocer/mayor/postmaster showed outdoor films before dedicating a space in his downtown grocery store with post office to show indoor films. Naming it after himself, it was the Myers Theater. The theater was developed much in the same way that show-stores had developed in the first part of the Century in downtown Dallas. Myers opened the theatre on December 14, 1928. And the good news is that the Myers would find new operators who gave a permanence to the option.

The Myers show-store Theater space was taken over by A.R. Lowery and his wife, Vera who replaced the benches with actual theater seating and renamed it as the Plaza Theater on September 13, 1938 official grand opening Clark Gable in “Test Pilot.” Their 8-year old son, John, made news at that location when he made it to the final chapter of a western serial with a broken leg.

Not long after World War II, A.R. Lowrey passed away, Vera and her now-grown son, John, would decide to operate a larger theater. They moved to 1115 W. Main to launch the “new” Plaza opening December 23, 1949 as the town had surged to just over 1,000 residents. As of the mid-2010s, the old Myers/Plaza Theater space was still quite vibrant as a completely redesigned retail operation.