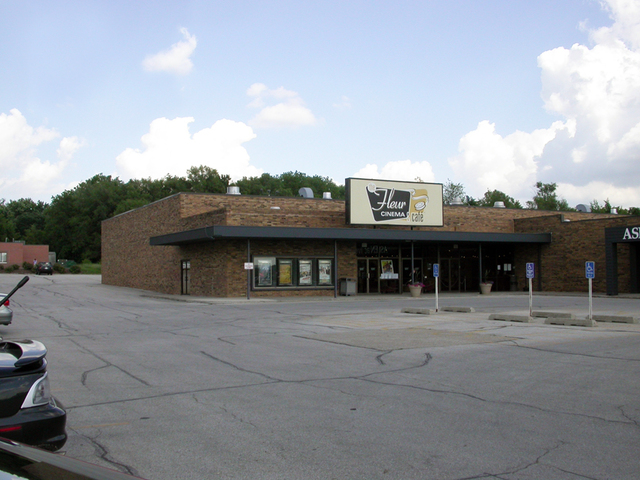 Originally opened November 25, 1970 by the Dubinsky Brothers as the Fleur Four Theatres. It was later taken over by by Carmike Cinemas as the Fleur 4 Theatres in 1992. It was closed by Carmike in 2001, but a short time later on October 26, 2001 reopened as an independent. The lobby was converted to a café and the theatre given the new name, Fleur Cinema & Café. The theatre mostly plays art film and the theatre/café has proven quite successful.

The Fleur Four Theatre was actually opened in 1970, and was originally operated by Dubinsky Brothers Theatres. The November 2, 1970, issue of Boxoffice Magazine said that Irwin Dubinsky had spent the day of October 26 checking on the progress of the Fleur Four, and that the planned opening date was November 18. The new four-plex would have 1,250 seats.

The Dubinsky circuit, based in Lincoln, Nebraska, grew rapidly in the 1970s. They apparently operated the Fleur Four until the company was bought out by Chicago-based Excellence Theatres (formerly Essanass Theatres) in 1989. At the time of the sale, Dubinsky operated 127 screens. Carmike Cinemas took over management of Excellence Theatres in 1992.

That should read “Esseness” rather than Essanass. My mind has been wandering into Beavis and Butthead territory again.

Poor JV: it was actually Essaness. (I think I remembering reading somewhere that this was a name created by phonetically rendering “S & S” – the first letters of the original owners' last names).

November 25th, 1970 grand opening ad has been uploaded here in the photo section.

the opening may have to be double-checked. An article in the Des Moines Register on Oct. 26, 2001 says “opening today”

Here’s a new 4-page 50th anniversary FIDDLER ON THE ROOF retrospective featuring a roadshow playdate chronology and historian Q&A. The Fleur’s lengthy run is mentioned in the piece.

“The Rocketeer” was presented at the Fleur 4 (Auditorium #4?) beginning on the film’s nationwide release date, Friday June 21, 1991.