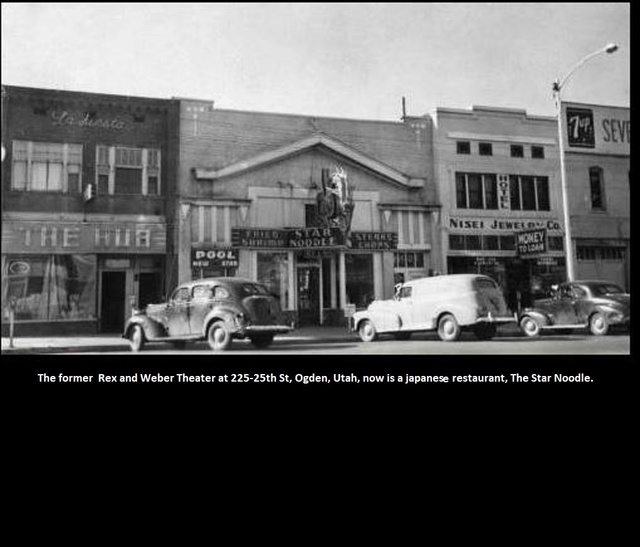 In March of 1927, the Rex Theatre was billed as the permanent home of boxing in Ogden but then this experiment ended in November and the Rex Theatre evidently closed. An article in the Standard-Examiner on September 29, 1929 announced that Steck was spending thousands of dollars to open the former Rex Theatre as the Cozy Theatre. Steck’s other theatre, the Lyceum Theatre, would show sound pictures exclusively while the Cozy Theatre would be only for silents. This was Steck’s second Ogden theatre named the Cozy. In 1917, Steck had bought another Ogden theatre, the Oracle Theatre on Washington, and changed its name to the Cozy Theatre, but he later sold that theatre.

In late 1931, the Cozy Theatre began to play exploitation movies such “The Escape of the Captive”. Their ad went; ‘Sex motion picture’. No children allowed' ‘For adults only’. Apparently in August, films came to an end at the Cozy as a news article in August 1931, stated that the theatre was repainted, re-carpeted and the stage enlarged for local little theatre productions.

After the arrival of the railroads, the area around 25th Street leading to Union Station began to gain a notorious reputation. Thus a headline in the Standard-Examiner on September 3, 1931: ‘Citizens Ask City Board To Make Cleanup on 25th Street’. The article went on, charging that ‘known prostitutes, gamblers and bootleggers with their hanger-on are allowed to negotiate their business openly on twenty-fifth Street west of Washington Avenue, a group of taxpayers submitted a petition this morning to the city commission requesting an investigation of the condition and demanding that the situation be corrected’. The article said ‘It was explained that Stanley Steck, who controls the Lyceum and Cozy theatres, is letting Weber College use the Cozy theatre site free of charge on condition that it lend its influence in cleaning up the street’. This led to an exchange of words at the city commissioners meeting which questioned the wisdom of exposing college students to these elements.

From September of 1931 to late-1939 it was known at the Weber Theatre and staged community plays by Weber College and later the Little Theatre Guild. In April of 1934, Steck sold his interests to Paramor Theatres who continued to let The Little Theatre use the building. From 1939 until 1943, the converted theatre was known as the Jumbo hotel, but in the Standard-Examiner the city commissioners referred to it as a ‘flophouse’. Not that ‘flophouse’ was a negative term because it was agreed by all that those who couldn’t afford the better hotels needed a place to sleep. The commissioners concern was that it was not sanitary or fireproof enough and that a renewal of its license had to be denied.

The 1943 edition of Film Daily Yearbook lists the Weber Theatre being operated by Paramount Picture Inc. through their subsidiary Tracy Bareham (no seating capacity is given). In March of 1943, the army who had refurbished it and installed new seating and projectors opened it for Black soldiers ‘because there is an acute need in Ogden for additional recreation facilities for Colored troops stationed in the area’. The movies, for which there was to be a nominal charge, were to be shown within 30 days of national release. Evidently the Army vacated the building when the war ended and since 1945, the Star Noodle Parlor has been the primary tenant. Star Noodle is now part of the 25th Street historic district, a revitalized part of Ogden, complete with restaurants, shops and clubs.

Here is the Star Noodle marquee in 1983:
http://tinyurl.com/rypsoe