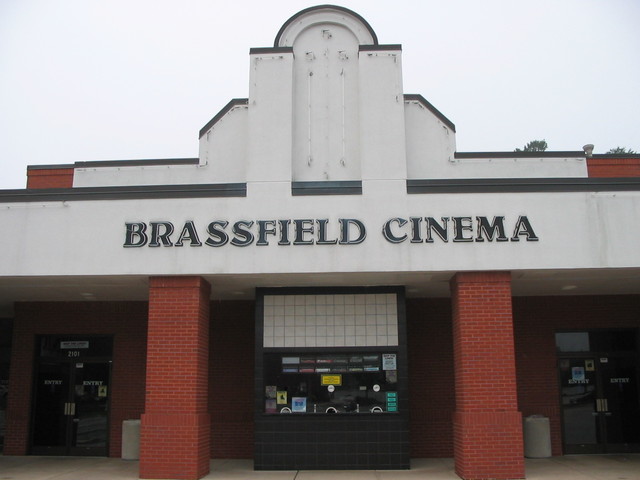 Located at the intersection of New Garden Road at Battleground Avenue in the Brassfield Shopping Center. The Brassfield Cinema 10 opened October 6, 1989 under Premiere Theatres. Cinemark took over this cinema less than a month after it opened. Considering that the Brassfield Cinemas 10 has strong competition against several multiplexes in the Metro Greensboro area, its amazing that this theatre does astounding business with both first and second run features. It was closed on March 17, 2020 due to the Covid-19 pandemic. It was announced in May 2021 that the closure would be permanent. In January 2023 it was announced it would reopened in either spring or summer 2023 and operated by Golden Ticket Cinemas.

This theater has been open since at least 1989, if not earlier. Considering that the Brassfield 10 competes against several megaplexes (Carmike 18, Regal Greensboro Grande 16, Grand 18 near Four Seasons Mall, and the Carousel Grande 20), it’s amazing that Cinemark hasn’t pulled the plug yet.

I believe this was one of Mike Campbell’s original Premiere Cinemas that he sold to Cinemark prior to founding Regal.

It was indeed opened as a Premiere Cinema; Cinemark took over less than a month after it opened. That Premiere chain had no connection to the Premiere Theatres (UEC Theatres) in Eastern North Carolina.

Nighthawk 1 and Scott Neff: I have found the original newspaper ad for the Brassfield Cinema’s grand opening. This theater has been opened since October 6, 1989 and it was under Premiere Theatres. Cinemark took over the operations of the Brassfield 10 in mid-November of 1989 less than a month after it opened. This theater is still in operation. I have the ads if you need to see them and I will be happy to give them to you at

It announced today that the Brassfield Cinemas will be re-open either late spring or early summer 2023, and it’ll be operated Golden Ticket.