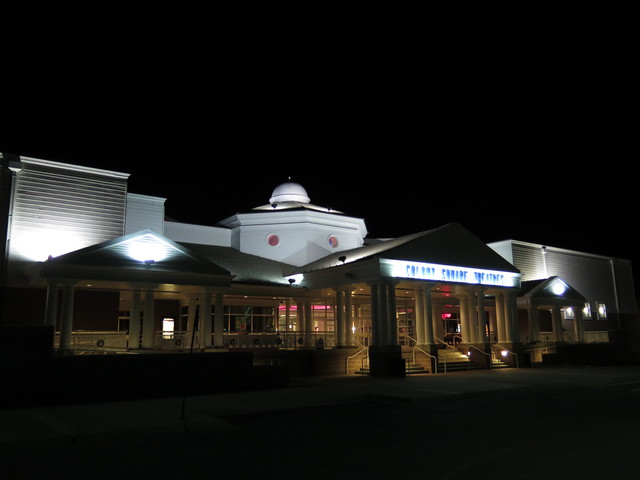 The Colony Square 12 was originally operated by Mann Theatres, followed by Colorado Cinemas. It became part of Kerasotes Theatres, featuring stadium seating, digital sound and shows mostly first run attractions with a mix of art and independent films. AMC took over, and after them it was operated by Regal Cinemas. It was taken over by Cinebarre in August 2014 and now operates with 11 screens.

Colony Square was actually originally operated by Mann Theatres until they sold all their Colorado theatres to Colorado Cinemas LLC.

Originally the Mann 12 Theatres, this multiplex was designed by Behr Browers Architects, who feature a slide show on their web site. The theaters originally had standard raked floors, but a subsequent remodeling has converted them to stadium seating. The exterior and the lobby of the building were designed in a sort of Palladian Revival style (which the architects' web site inexplicably calls “early American,”) but there were only hints of the style in the auditoriums.

With 38 AMC screens at two locations just a few miles south, there’s never a long wait at the Colony Square 12.

Beginning in August 2014, this location became part of the Cinebarre chain of restaurant/theaters. Auditorium count went down to 11 from the previous 12 rooms.

As of the evening of December 30, most of Louisville and all of the adjacent town of Superior are under evacuation orders due to a wildfire that has burned almost 600 buildings, including a large hotel, a Target store, and more than 500 houses. No word at this hour of whether or not the theater has suffered any damage.