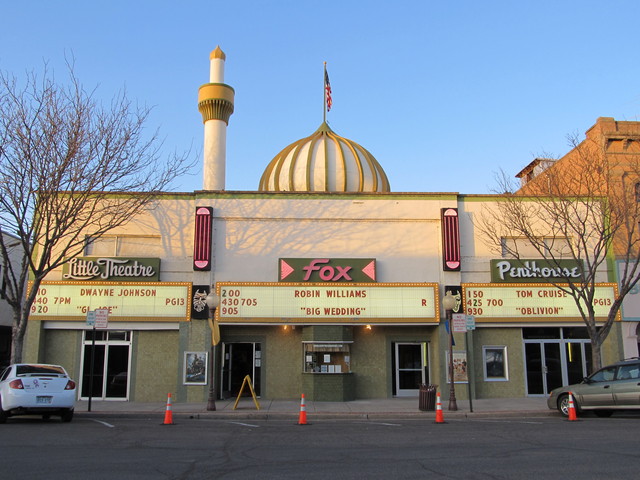 The Fox Theater opened on October 31, 1929 (just days after the Wall Street stock market collapse). It was a single screen theatre with 789 seats. It was designed in a splendid Moorish/Eastern style by architects Dick Dickson and Montana S. Fallis of Denver, CO. Externally, it has an ‘onion’ dome and a minaret, both of which survive today despite modifications to the lower part of the facade. Internally, the original decoration would not have been out of place in a mosque.

Now known as the Fox Cinema Center, it is a three screen cinema showing first run attractions. The two additional screens, known as the Little Theatre & Penthouse have been created out of former retail space on either side of the main theatre entrance.

This is the theater in 1940. Style is some kind of Middle Eastern variant.
http://tinyurl.com/q3hsxm

Here is the photo:
http://tinyurl.com/osjqyu

Here is a night shot from a few years ago:
http://tinyurl.com/lt4q5p