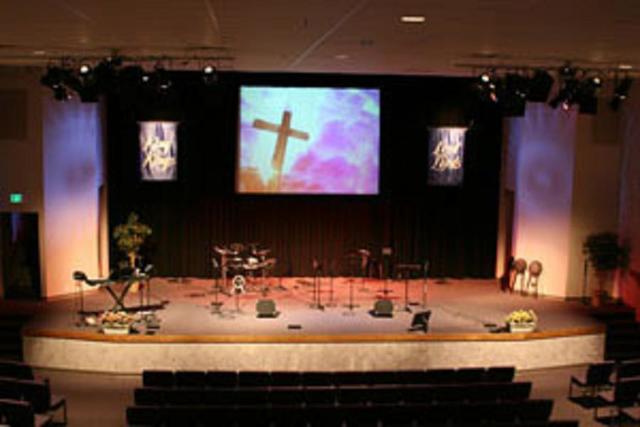 Opened on February 25, 1970 with Barbra Steisand in “Funny Girl” & Natalie Wood in “Bob & Carol & Ted & Alice”. This was one amazing and in some ways, historic theatre. It was your standard example of a ‘Cooper’ theatre, complete with the orange roof. There were 350 seats in each auditorium. I visited this theatre many times while growing up. Operated by the Commonwealth Amusement chain, and by United Artists, the last movie I saw there was "Spiderman" (2002), and it was closed in 2004.

It was sold for $800,000.00 to the AGUR Foundation. Journey Christian Church now uses the building and the landmark orange roof has been removed and replaced. This theatre sat just one block east of the Carmike 5.

Before being operated by Commonwealth (as mentioned in the intro above) this was run by The Cooper Foundation (1970-74) and Cooper-Highland (1975-78). Commonwealth Amusement acquired the Cooper properties in ‘78.

The Cooper Twin opened on February 25, 1970. The debut attractions were “Funny Girl” and “Bob & Carol & Ted & Alice.” According to an article in The Greeley Daily Tribune, published around the time the theater opened, this was the first twin theater built in Colorado.

Not bad features to open a Twin with.I have seen some horrible bookings to ring in a new theatre.Mainly mine booking.“NICKLEODEON”.

I was the second manager of this theater (1972 – 1976). Both sides had 350 seats. We ran the only reserved seat presentation (Man of La Mancha) to be presented in Greeley in #1. I was there during the transition from Cooper Foundation to Cooper-Highland. Later was made City Manager for Cooper-Highland in Coloraldo Springs. Later still was Northwestern Area Manager for Commonwealth Threatres in Boise, ID (Boise, Great Falls & Salt Lake City. While in Greeley, we operated the Colorado Theatre, Chief Theatre, Cooper Twin Threare, and Wilshire Twin Threatre. The merger with Highland added a Drive In Theatre (can’t remember the name).