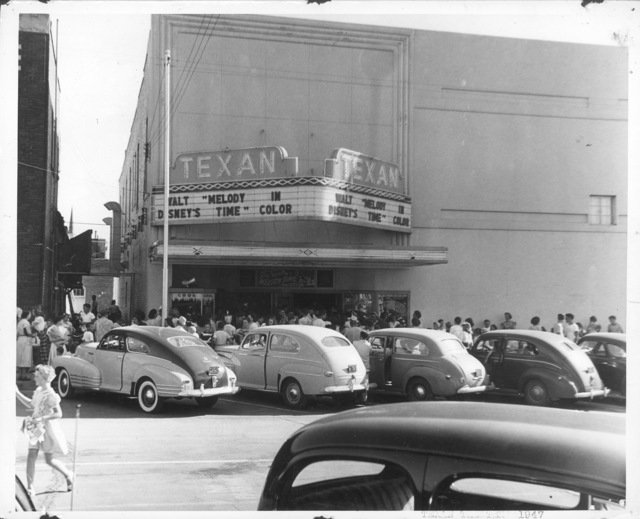 The Texan Theater was operating before 1941, when it was listed as (Closed). It had reopened by 1943 and was operated by Paramount Pictures Inc. through their subsidiary Hoblitzelle & O'Donnell.

The Texan Theater was closed in 1951. It was converted into a bank, followed by use as a Public Library. That closed in 1972 and the building was demolished in the late-1970’s and a New Arlington City Hall was built on an extended site.

The Texan was Arlington’s premiere movie theater in the 1940’s until closing in 1951. It was located in the 100 block of West Main St, mid block on the south side of the street, between Arlington City Hall anf Arlington State Bank. Directly adjacent was the tiny Rockefeller burger chain, and the McIntosh Restaurant. The theater was operated by the Interstate Chain along with the Aggie Theater on East Main. After closure it became the First National Bank, and the balcony was walled off and became a community room, home to the city’s only full size grand piano. In the 1960’s it became the new Arlington Public Library. Although the floors were leveled, the ceiling and walls retained the shape of the movie theater. The library moved in 1972, and the building was demolished in the late 1970’s for the new Arlington City Hall.