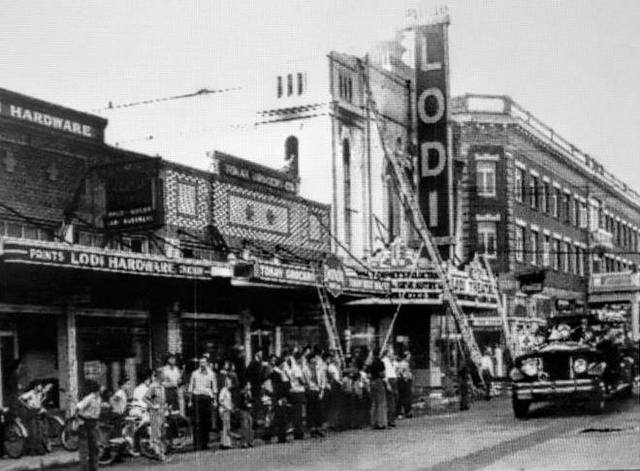 The Lodi Theatre was opened September 19, 1918. By 1926 it was operated by T & D Jr. Enterprises. It operated at least into the mid-1950’s, the Lodi Theatre was later demolished. Its site was later occupied by a U.S. Post Office which, from its architectural style, appears to be of late-1960’s or early-1970’s construction.

I notice that in that photo an establishment called Tokay Grocers is located next door to the Lodi Theatre. This makes me wonder if perhaps the Lodi was the Tokay Theatre, renamed. The Tokay is mentioned on three cards in the California Index, all dated 1937, the year the house was taken over by the T&D chain.

Of course Tokay is a pretty common name around Lodi, so it might be coincidence (there’s now even a Tokay High School, named for this variety of wine grape. I wonder if they considered the Wino as their school mascot?) Does anybody have a listing for the Tokay Theatre, with address, in an old Film Daily Yearbook or other source? It could be an aka for the Lodi, which was clearly in a fairly old building.

This opened on September 19th, 1918
grand opening ad is at
View link

Given the September, 1918, opening, the location on South School Street, and the fact that the opening manager was named A. A. Richards, it looks like this must have been the theater that was the subject of the following item in the February 6, 1918, issue of Building and Engineering News:

“Architects Stone & Wright, San Joaquin Valley Bank Bldg., Stockton, are taking figures for a three-story Class ‘A’ theatre and store building to be erected on South School Street in Lodi for the Lodi Investment Company. A. Richards of Lodi is also a part owner in the proposed structure.”

The names of the architects were Louis S. Stone and George Alexander Wright.

I don’t know what became of the Post Office I thought had replaced the Lodi Theatre. There is now a ready-to-wear clothing store on the site.

Definitely not the Tokay Theatre, which was a one story building in 1913 that later became the State Theatre below.