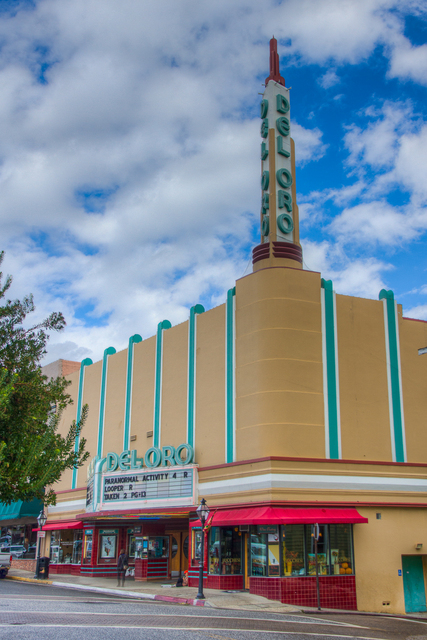 Named the Del Oro Theatre because of the surrounding area’s connection to gold mining, ‘oro’ being Spanish for gold.

This Art Moderne theater was built in 1942.

Thanks! I worked at the Del Oro Theater for several months in 2004.
I was the maintenance and janitorial manager working for the Getzes.
They were really nice people to work for. It was a joy to clean up the theater every day and get her ready for showtime!
While I was there, the management was in the process of completing the theater’s restoration and now it is a jewel of California cinema.
There was an old sign backstage that stated the theater had its grand opening on May 24, 1942, after being under construction for two years beginning in early 1940. The sign also had a printed programme showing that the theater showed a Hollywood double feature of two 1942 classics, plus a WB cartoon, a newsreel of WWII coverage, and a travelogue about Mexico.

Various issues of Boxoffice Magazine indicate that the Del Oro Theatre was not built by United Artists, nor operated by that chain during its early years. Construction was begun in 1941 by Golden State Theatres, but apparently the house was being operated by Albert and William Forman’s United Theatres Circuit later in the 1940s.

An item in the April 16, 1949, issue of Boxoffice said that a $36,000 damage suit against United Theatres and Del Oro manager Jack Keegan was being tried in Nevada County superior court. Mr. Terry T. Whitesides of Grass Valley alleged that he had fallen in the aisle of the theater on September 28, 1947.

I’ve been unable to discover when United Artists took over the house, but they were operating it when it was triplexed in 1975.

The entry for architect Otto A. Deichmann in the 1956 edition of the AIA’s American Architect’s Directory includes the Del Oro Theatre at Grass Valley in the list of his works. The project is dated 1942. I’m not sure if Deichman’s partnership with Mark T. Jorgensen had been dissolved yet in 1942.

I restored the neon marquee in my photo. Check it out here.

The Del Oro marquee can be seen in the 1950 noir social drama The Lawless starring Macdonald Carey and Gail Russell. Locations were in Grass Valley and Marysville.