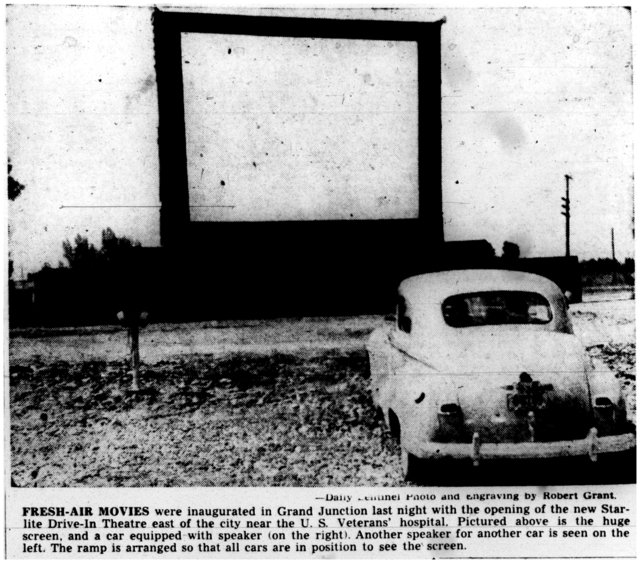 Opened August 2, 1947 with John Carroll in “Bedside Manner” & Sidney Toler in “Dark Alibi”. The Starlite Drive-In was the second drive in theatre to open in Colorado and had a car capacity of 300. It was closed in early-1959 and was demolished to build the Teller Arms Shopping Center.

A new site was found for the Starlite Drive-In at 2303 G. Road, opening May 5, 1959. It was closed in 1967 following its final year of operation screening Spanish language movies.

Boxoffice had an interesting report in its March 2, 1959, issue. The new owner of the Starlight, William More, said he planned to move the drive-in across town, screen tower and all. The town’s rapid growth had made the Starlight’s original property too valuable to use as a drive-in. I don’t know if the plans were carried out or not, and I haven’t been able to find any later references to it in Boxoffice.

The Chief Drive-In was built by Westland Theatres and was opened in 1951 or 1952.

The STARLITE (correct spelling) opened on August 2, 1947. It was owned by a partnership of the Files Brothers, Lloyd and Clarence (who owned the land), Roy French (manager), and Stanley Siegenthaler. It was located at approximately 2401 Street and North Ave (east of where the VA hospital). It was the second drive-in in Colorado.

The theatre originally had a capacity of 300 but it was enlarged to accommodate 400+ cars. The entrance was off the south side of North Ave directly across from the current address of 2400 North Ave. The screen was situated at the northwest corner of the lot and faced southeast. A long fence directed traffic along the west side of the property to the southwest corner of the lot where entry to the field was made.

The concession and projection booth was located in the center of the field. The projectors were Simplex, sound heads Motiograph, with amplification and speakers by RCA.

The Starlite was never at 2881 North Ave. The Rocket Drive-In (owned by the Scales Family) occupied that spot. The Scales owned and operated the theatre until the 1960’s when they leased it to the Westland Theatre Corp. of Colorado Springs. It closed in 1985 and was demolished in 1988 to make room for WalMart.

As for the Chief Drive-In, it was at 2868 North Ave (phone 243-1340). It opened on March 21, 1952 and closed at the end of the 1989 season. It was built and owned by Westand (later Commonwealth, Comonwealth/UA, United Artists etc.). Yes, it’s property parcel is now Colorado West Mental Health. The ticket booth was moved during the demolition to Guyton’s Fun Junction near the former theatre. Where it went after that, I don’t know.

The Grand Junction area had one other drive-in as well. It was possibly named the Monument but I don’t remember for sure. It was off 21 ½ Rd just north of the “new” Fruita highway. It opened in the late ‘50’s or early sixties but only lasted a few seasons. It was a cheap affair, used equipment, terrible ramp arrangement. By 1966 it was gone.

The Monument Drive-In was located at the southeast corner of G Rd & 23 Rd, and it visible on Google Earth using 1993 imagery.

“Clarence Files has taken over the operation of the Starlite Drive-In, Grand Junction, from the former operator William Moore.” — Boxoffice, May 2, 1960

Nick and NYozoner are both right, with a healthy dose of Joe Vogel too. As described by Grand Junction’s Daily Sentinel, William E. Moore (two o’s) bought the Starlite from Clarence L. Files in early 1959 and moved it from its original 2403 North Avenue address to 2303 G Road. It closed “for a week or so” in mid-March that year to move the screen tower, though the projection building / concession stand was new. The first ad from the new location was on May 5.

After all that work, the results must have been disappointing. Clarence Files regained control of the Starlite from Moore in the spring of 1960.

The Starlite ownership bounced around in its final years. Clarence Files moved to Naturita, and the projector-snack bar couple at the Uranium there, Gladys and Ernest Barnes, bought the Starlite in late July 1961. Mr. and Mrs. Files took back the Starlite toward the end of the 1962 season.

Boxoffice mentioned on June 14, 1965 that A. M. Crews had taken over the Starlite from the Fileses. The April 4, 1966 issue reported that someone (presumably Crews) announced that the Starlite would not reopen, but three weeks later, Boxoffice said, “Harold Haws, formerly a motion picture theatre operator in the territory, will reopen the Starlite Drive-In at Grand Junction.”

The Starlite’s final English-language ad in the local Daily Sentinel was Oct. 15, 1966, where it promised, “Open Thurs., Fri., Say. & Sun., fall & winter season. Car heaters.” It ran ads for a Spanish-language double feature on Oct. 16-18, then stopped advertising there. A 1976 retrospective in the Daily Sentinel said of the local drive-ins, “Chief and Rocket prices went up to 85 cents in 1967, the same year the Starlite folded.”