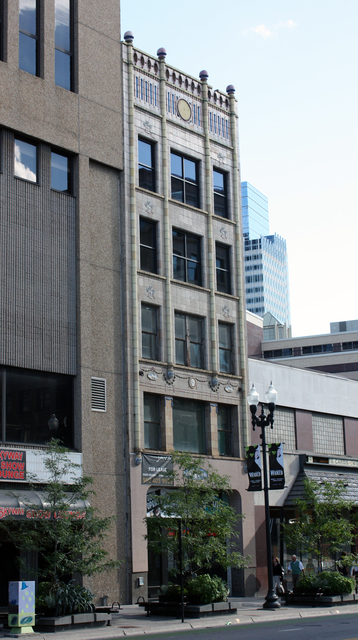 Designed to be a newsreel theatre, the small, 250-seat Time Theatre ended up opening as a first-run film house September 1, 1934 with “The Lost Patrol”.

The simple Art Deco style Time Theatre began showing second-run films in 1936, which had played as long as two years earlier at near-by palaces like the Pantages Theatre and State Theatre. This remained a successful format until October 3, 1939 when it switched over to adult films, and was renamed the Esquire Theatre.

The Esquire Theatre would have several run-ins over the years with the police, mostly due to the names of the then-risque-sounding names of the films on its marquee. As ridiculous as it sounds today, in 1941, when the Esquire Theatre showed a movie starring former fan dancer Sally Rand called “Nude Ranch”, the authorities ordered the theatre’s owners to change the name of it to “Dude Ranch” on the marquee or face fines.

On December 6, 1941, adult fare was gone, and the Esquire Theatre given another name change, now called the Newsreel Theatre. It was run by Metropolitan Theatres of California, and finally used for the purpose it was built for nearly a decade earlier, for newsreels, which had become very popular in the late-1930’s when war broke out in Europe, and even moreso after the attack on Pearl Harbor.

After a few years of strong business during World War II, the Newsreel Theatre once again changed its name and format. It became the Pix Theatre on January 8, 1947, and briefly was a roadshow house, but by 1952, had closed it doors. This time, it was for good, and was converted into retail space not long after.

Nice night time marquee shot. This was recently home to Teener’s costume shop. The building is now vacant and for sale. It has great terra cotta on that narrow little facade.
View link

Today the building is vacant and for sale.

January 8th, 1947 first ad as Pix in the photo section