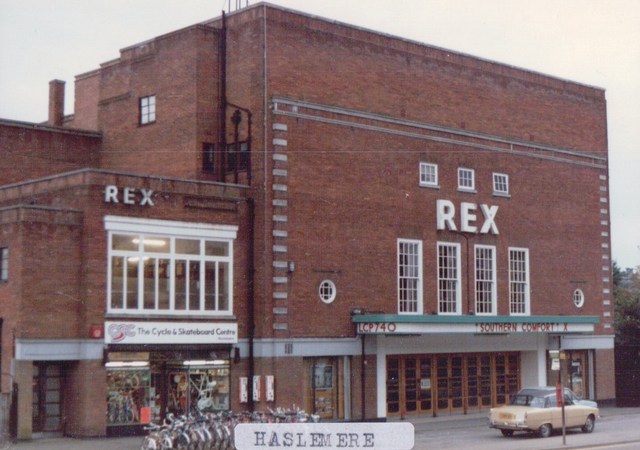 Located a mile west from the town centre in the Shottermill district of Haslemere, Hampshire. The Regal Cinema opened on 28th September 1938 with Fred Astaire & Ginger Rogers in “Follow the Fleet”. It was operated by the County Cinemas chain. It had a 36 feet wide proscenium and a 15 feet deep stage, with three dressing rooms. There was a Compton Theatrone organ (an electronic organ) which had a 2Manual console that was opened by organist Peter Gomez. The Rex Cinema had a cafe and it also had its own power generator.

The organ was removed in 1954, and the cinema was operated at that time by the independent C.R. Killlinger Theatres Ltd. By the 1970’s the cafe had been converted into a bar. Set to close in March 1985 with the film “Dune”, it was taken over by the ACE group of cinemas, but this was only for a brief period as it closed on 28th November 1986 with Clint Eastwood in “Pale Ride”. By then a cycle shop was using the former cafe/bar area. The Rex Cinema, which was unaltered since the day it opened and was a wonderful example of a 1930’s ‘Super Cinema’, was demolished and housing built on the site.

A veritable time capsule of excellence, so what did they do? – knock it down!

Advert for a 1960’s pop show, The Ronettes no less, staged at the Rex