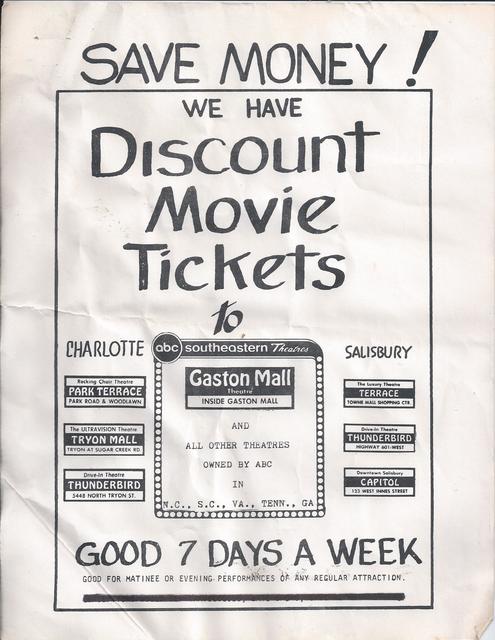 The Terrace Theatre became Centra Piedmont’s only Ultra Vision theatre that became a new magnificence in movie magic. Years ahead in cencept and design, the Terrace Theatre was a single screen theatre seating 750. It was complete with the latest ultra modern designs when it opened, becoming the first suburban theatre that was an alternative to the downtown indoor movies houses at that time.

The Terrace Theatre was Salisbury’s gem of a theatre and the first ultra-modern cinema in all of Rowan County that featured luxurious seating, a 6-channel stereophonic surround sound, beautiful decor and the latest furnishings, along with a huge widescreen that was capable of showing films in 70mm and 35mm formats.

That would change in the mid-1980’s when its main auditorium was split into two screens, creating smaller screens and shoe-box auditoriums. Last operated under Cineplex Odeon, it remained that way until it closed on February 14, 1991.

The Terrace Theatre was Central North Carolina’s only “Ultravision” Theatre when it opened on May 29,1969 with the Clint Eastwood-Richard Burton thriller “Where Eagles Dare”. The Terrace was one of several “Ultra Vision” Theatres that was under the Wilby-Kincey theatre chain in the mid-1960’s and then under ABC Theatres during the 1970’s and later it was part of Plitt Southern Theatres. It remained a single screen theatre under the mid-1980’s when it was twinned until it’s closing in 1991,last operated under Cineplex Odeon.

I bet spliting the theatres made it look horrible,Theatre owners in this era loved ‘sheetrock".

I passed by this theater in July 1986 on a trip to Charlotte. The Terrace looked like it had already closed at that point – no movies listed on the marquee, part of the Terrace sign was missing, empty parking lot. This must have been the time the auditorium was split into two theaters. After July 1990 the Terrace would not have been under Cineplex Odeon as that chain withdrew from North Carolina that month, selling most of its NC locations to Carmike (the Cardinal in Raleigh and Carolina in Chapel Hill were closed).

I started working at the Terrace Theatre in 1977 as a cashier/concessionist. It cost 2.75 for adults and 1.50 fro children. It was ABC Theatres back then and had 599 seats. (one seat was broken and taken out). It then changed to Plitt Theatres and later Cineplex-Odeon. If you look at the Park Terrace in Charlotte and the Thruway Theatre in Winston-Salem, they looked similar. The Thunderbird Drive-In was also part of the theatre chains.

My partner and I bought the business in 1982 and twinned it (250 seats each side(. We put in Dolby stero and running lights on one side and Kintec sound and running lights on the other. The first side opened with Never Say Never Again (James Bond) the end of September 1982. One week later the other side opened. We sold the business 1985-86 to the same people who opened the Rowan Cinemas which became the Salisbury Mall Cinemas.

Nighthawk1: After July,1990,theatres that were under Cineplex Odeon sold most of it’s North Carolina locations to Carmike with the exception of several theatres that had the same architectural structure as the Terrace Theatres in Salisbury. If you look at the other Terrace Theatres in Hickory,Asheville,Greensboro and Burlington,the Cardinal in Raleigh and the Cardinal Theatres in Jacksonville and Rocky Mount,and Fayetteville and the Center in Durham basically had the same similar design and concept. When Carmike took over and bought out Cineplex Odeon,several theatres including the Cardinal in Raleigh,the Carolina in Chapel Hill,and the Thunderbird Drive-In in Salisbury and The Fort Drive-In in Fayetteville closed it’s doors forever under Cineplex Odeon. Carmike took over the remaining cinemas(including the Park Terrace and the Thruway,and all of the Terrace and Cardinal theatres in the state).

Kleesburg Theatres by 1986 acquired the Terrace Theatres from Cineplex Odeon. Kleesburg Theatres basically operated the Rowan Plaza Theatres 1 & 2 that closed in December of that year becoming the Salisbury Mall Cinemas which opened around Christmas Day of 1986.

Carmike never bought the Thunderbird in Salisbury. We closed it in the late 80s and used the land when we started rebuilding wrecked and theft recovered IROC cameros. The Rowan Cinemas were built and run by Tom Maines who also added more screens to the theatre.

Chuck1231 and Katmdo: You’re absolutely right….Carmike didn’t buy out Cineplex Odeon. They purchased some of the theatres that were once under Plitt Southern Theatres. By the early-1990’s the theatres including the Cardinal in Raleigh,the Carolina in Chapel Hill,and the Thruway in Winston-Salem closed. Also under Plitt were the closing of the Thunderbird Drive-In in Salisbury and the Fort Drive-In in Fayetteville(both were under Plitt and ABC Theatres)…..the Terrace in Greensboro and the Terrace Theatres in Burlington were acquired under Janus Theatres. So here are the theatres Carmike purchased or acquired that were formerly Plitt/Cineplex Odeon……

This was one of the several ULTRAVISION theatres that operated under Wilby-Kincey Theatres in 1969 and later on by ABC Southeastern and Plitt Southern Theatres. By the mid-1980’s,Kleesburg Theatres took over the Terrace’s operations until it’s closing in 1991. This theatre was NEVER under Cineplex Odeon when it closed.