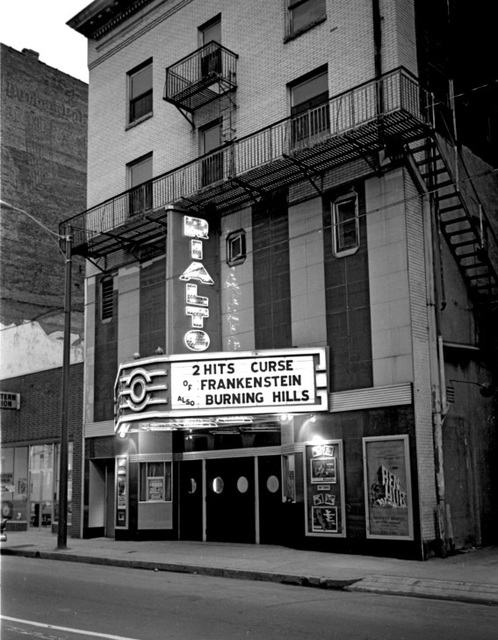 Originally opened as the New Orpheum Theatre on June 4, 1922. It was renamed Rialto Theatre on October 22, 1928 as part of the Wilby-Kincey Entertainment Group(which also owned and operated the Center Theatre in downtown Durham). It was closed in 1956, but reopened November 17, 1960. By the mid-1960’s, the Rialto Theatre was still bringing in the business, but by 1967, it closed its doors forever and was demolished.

The Rialto Theatre was originally the Orpheum Theatre, which was constructed in the early 20th century. “Urban renewal"in the late 1960’s resulted in the destruction of the entire block where the theatre stood. In 1978 the Durham County Courthouse was built on that site. Many photographs of the Orpheum/Rialto Theatre, as well as detailed discussion of Durham urban history can be found at the Endangered Durham website: View link

“Urban renewal” during the late 1960’s and early 1970’s resulted in the destruction of the entire block where the cinema once stood. The Rialto closed its doors in 1969. The Criterion Theatre,located on Church Street closed its doors in 1974. The destruction of several buildings were demolished during the early to mid 1970’s between 1970 and 1976.

The Durham County Judicial Building open its doors to the public in 1978 where the Rialto Theatre once stood.
The main entrance to the Durham County Courthouse is facing Main Street(across from the old courthouse),while the backside entrance to the building is on Parrish Street right at the intersection of Church Street and South Roxboro Street.

Damaged and closed by a fire circa 1960; the Rialto was repaired and it was an “art house” from 1962 to 1970. Among its hits: Tom Jones, A Man and a Woman, I Am Curious—Yellow. Truffaut, Fellini, and Bergman films played here, as did some Hollywood product like Finian’s Rainbow. Darn that urban renewal.

Herald Sun columnist Wyatt Dixonâ€™s article from June 7, 1943 states, â€œIt was in the Rialto theater that the first sound picture was shown. Conrad Nagle was at the height of his popularity as an idol of the cinema when he appeared in the history-making production, only part of which was in sound.â€ Dixon also stated the Orpheum had vaudeville shows before the talking movies supplanted them as entertainment.

Local historian and community activist R Kelly Bryant, Jr. recently told a story about the Orpheum theater. The theatre was segregated, but blacks were allowed to sit in the balcony â€" provided that they entered a structure on Parrish Street, crossed the roof, and entered the Orpheum from its back door. Kelly remembered watching The Phantom of the Opera, starring Lon Chaney, from this balcony. In one scene, Chaney turns to face the camera, revealing his hideous face for the first time in the film. Kelly fondly remembered all the white ladies gasping in horror â€" and he and his friends laughed from above.

Chapel Hillian Henry Thomas also remembers the Rialto. Thomas recalled that August in the 1960s meant back-to-school shopping in Durham, because Chapel Hill had a dearth of stores. Watching movies in the Rialto was another mainstay. He wondered, though, what his parents thought of him attending movies next-door to the Malbourne, which had acquired quite a seedy reputation. â€œEvery 13-year old boy in Chapel Hill knew that one could find a prostitute at the Malbourne,â€ although he added that not every boy knew what that meant.

In the 1970, the Rialto (along with several other buildings on this block) was demolished using Urban Renewal funds, clearing the way for the third Durham County Courthouse.

and reopened as the Rialto on October 22nd, 1928. Grand opening ad posted.

1967 photo added via Harald Morgalla. Everything you see is gone…