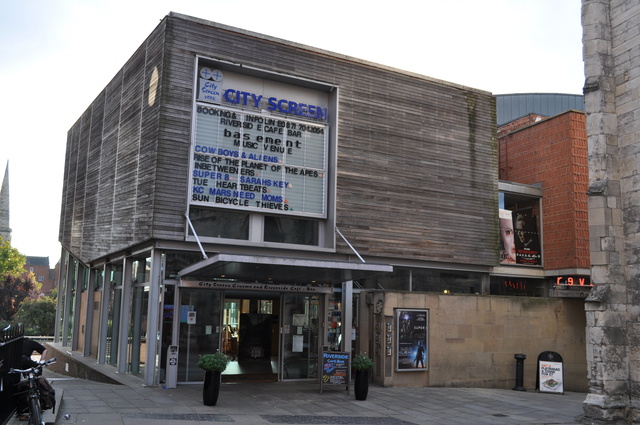 City Screen is located in the centre of York, just off the main shopping street, behind the church of St. Martin-le-Grand with its impressive clock overhanging Coney Street.

Its history as a repertory cinema operating from Tempest Anderson Hall in Museum Gardens blossomed in 2000 when City Screen joined the Picturehouse stable and relocated to its present location, occupying the former printing press and offices of ‘The Yorkshire Herald’.

The Riverside enjoys glorious views from a spacious terrace overlooking the River Ouse.

The cinema is equipped with THX sound and Real-D 3D capability, programming both mainstream and independent films for a discerning audience. Live satellite feeds of opera, ballet, and National Theatre Live complement the cinematic offering.

It’s been a successful few years since the cinema opened. The programme is very wide and appealing with mainstream and arthouse filmfare. The cinema has tried regular 70mm screenings [usually once a month] and even replicated Sensurround and screened “Earthquake” with this attraction. Screens are large in all three auditoria with excellent sound. THX in Screen One is superb. I go as often as I can – wished I lived in York!

This is a fantastic venue.

Does anyone remember it when it was in a hall in the Museum Gardens?!! Great days!

I remember the City Screen in Museum Gardens very well. Nicely raked auditorium, large screen and well presented. I played for several of their special silent film programmes to audiences of 200; sadly the new City Screen doesn’t seem interested in programming similar silent films excepting those which come with Arts Council support, etc. Too much hassle to hire an instrument, etc., etc. Sad.

A couple more pictures can be found here:–

A photo of the previous venue (Tempest Anderson in the Museum gardens) can be found here:–

Photos, including an interior, taken in February 2011 here:–