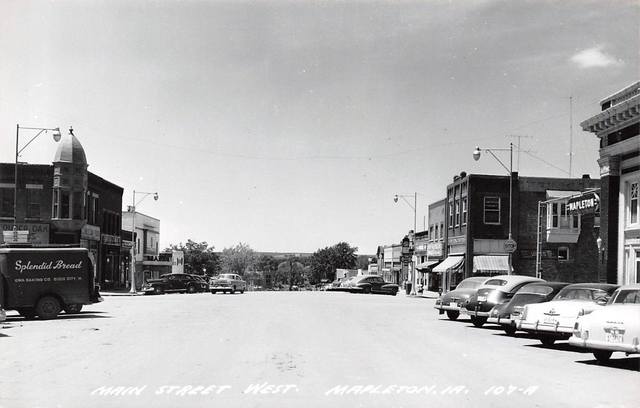 Replacing the towns' earlier Maple Theatre (former Princess/Orpheum Theatre) at a different location, the Maple Theatre opened on January 10, 1950 with “Challenge to Lassie” starring Edmund Gwenn & Donald Crisp. The architect was Robert Boller of the Boller Brothers in Kansas City. The design was in an Art Deco style. The theatre listed 295 seats when it opened. The Maple Theatre was closed in May 1969 with Julie Andrews in “The Sound of Music”. The building was demolished in November 1994.

Hi, Chuck1231 – I am very interested in your posting from earlier this year, as I am working on a statewide survey of movie theaters for the Iowa SHPO. It contradicts what we’ve found in Mapleton – Can you provide the source of your information so we can reference it in our survey information? Thanks!

kdinkcmo: The 1948 year of opening currently given in the intro is wrong. The Maple opened in 1950. Boxoffice Magazine ran a brief item datelined Mapleton in its June 25, 1949, issue which said: “Construction of a 50x100-foot brick building to house the new Mapleton Theatre has begun here. The business is owned by F. W. Kugel of Holstein and will be managed by F. D. ‘Doc’ Naulteus.”

Then the January 7, 1950, issue of Boxoffice had an item saying that the opening of the new Maple Theatre was scheduled for January 10. The first movie was to be “Challenge to Lassie.” Boxoffice said the house had 400 seats, but Boxoffice was frequently a bit off on seating capacity. Their items also had frequent spelling errors (“Doc” Naulteus might have been Nalteus or Nulteus or even Multeus, depending on which issue of Boxoffice you look at.)

I think Chuck probably got the 1948 date from the Boller Brothers Architectural Records (PDF here) which lists the Maple Theatre as a 1948 project. I think the Boller records give the year in which the firm began working on a given project, though, which is often not the year the buildings were completed.

The Orpheum in Mapleton is mentioned in Boxoffice in December, 1937, and in August and October, 1938. The first item names the operator as Ray Richards, and the last says it is Roy Reichard. I haven’t found either the Maple or the Princess mentioned in any issues from the 1930s.

Orpheum probably is an aka for the Princess/first Maple, though I wouldn’t yet rule out the possibility that the Princess closed and the Orpheum was a different theater that later became the Maple. I doubt that Mapleton was ever large enough to support two theaters at once, though.

Regarding the several comments. As someone who grew up in Mapleton in the late ‘40s and through the ‘50s I can verify that “Doc’s” name was spelled Naulteus, who along with his wife, Laura or “Kitch”, as everyone called her, managed the Maple Theatre and then owned it. In 1952 Doc bought the Maple from his former employer, E.W. Kugel, and sold it in 1955 to Charles Vickers. The owner when the theater closed in 1969 was Merle Davis. The local newspaper, the Mapleton Press, digitized and online with a marvelous search capability can be found at http://mapleton.advantage-preservation.com The Jan. 5, 1950 issue (the newspaper staff forgot to change the year to 1950 so the masthead erroneously reads 1949) shows the new Maple Theatre on the front page and the paper has several pages regarding the new theater. The Maple was demolished in Nov. 1994 leaving behind the space with the cars seen in the photo at the top of this page. The Dec. 1, 1994 issue of the Mapleton Press offers a major write-up of the Maple’s life from beginning to end with several pictures and an interview with Doc Naulteus. Please refer to the two other entries on this web page for additional information on the Princess and the older Orpheum/Maple theatres.