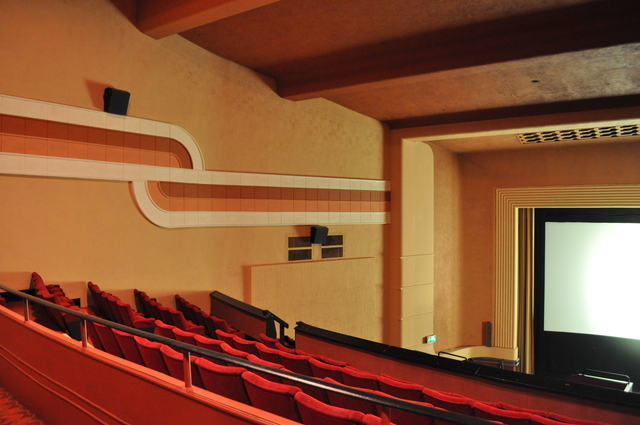 Like Chester, the historic town of York proved problematic for Oscar Deutsch’s Odeon Theatres Ltd. chain in 1937, when they wanted to open a cinema. The City Council insisted that it was to be located outside the historic city walls and that it did not look like an Odeon with typical faiance tiling. Accordingly Robert Bullivant, of the Harry Weedon architectural practice, came up with a more refined brick scheme - which still managed to look like an Odeon. It opened on 1st February 1937 with Roland Young in “The Man Who Could Work Miracles”.

Seating 1,484 in stalls and balcony levels it proved successful and in 1972 was tripled. This was not a standard scheme as at York the circle was extended forward to form a stadium style 820 seater - very attractively (original decor was retained). There were then two 111 seat minis under the former balcony.

In 1981, the Odeon was designated a Grade II Listed building by English Heritage.

Recent troubles began when Odeon Theatres wanted to re-brand the cinema with new signage, removing the original ‘ODEON’ signs from the Grade II Listed building. But the local Council insisted that everything should remain intact. This led to threats by Odeon Theatres to close down, despite good attendances. The reality of closure came on 31st August 2006.

In June 2007, the building was purchased by Reel Cinemas, who refurbished the cinema, restoring many original features. The cinema re-opened as the Reel Cinema on 19th June 2009, with a black tie gala and the appropriately named film “Transformers:Revenge of the Fallen” showing on the main 880 seat screen upstairs.

Morning all, It’s been announced that the Everyman will open to the public on Saturday the 30the of December. Having had a sneak peek at the restoration the quality of the finishes is fantastic. The downstairs foyer has an island counter/bar which echoes the original ticket paybox from 1937. Missing columns in this area and also the circle foyer have been recreated to original specifications. The downstairs screens which were always a bit shoddy in my opinion have been tastefully redecorated with decorative sound proof boarding. Screen one is the main auditorium and has the floating screen which might take some getting used to in front of the former proscenium. All this area is painted in Everyman Grey with the decorative acoustic panel feature highlighted in gold. The original ventilation panels did not survive behind the boxed in areas so i’ve been told and sadly neither did the talked about mural in the circle foyer. This has been returned to it’s original double height space and a manificent trough light fixture has been restored and painted a 1930’s inspired gold.. Can’t wait to visit and give it a try..

I’ve seen the new cinema. In a word- stunning. A complete turnaround after the non-existant renovation done by Reel. The Odeon is back to its former glory and will be a great cinema-going experience again. Support it.

It looks like they have decided to closed one of the screens as they are advertising it as having 4 screens with 144 seats in screen 1, 53 seats screen 2, 53 seats screen 3 and 20 seats screen 4. I know that due to the style of Everyman cinemas there was obviously going to be a massive reduction in capacity but Screen 1 been reduced from 800 down to 144 seems a bit drastic and I do wonder how viable a 4 Screen cinema with so few seats can be.

Cjbx11, I suspect the first floor level tiny cinema, which Reel “shoehorned” into what was originally a stockroom for the shop unit on the ground floor below, could well have been dismantled in order to provide the new restaurant in the circle lounge with a baking/prepping space.

The reduction in capacity in Screen 1 is not as drastic as it first appears. The 1972 extension of the balcony has been removed and it would appear from comparing photographs that even 1937’s balcony has been foreshortened, therefore the space available for seating is now also much reduced. This means the sighting problems due to obstructions will have gone. The desire for a larger screen in front of the proscenium arch is possibly down to two factors. Firstly, the reduced seating area provides the same viewing position as the original rear circle where seating was at its farthest from the screen and from where the big screen did appear relatively small (the throw from projector to screen was 110' in Odeon days) – whereas today’s cinemagoers are accustomed to screens appearing somewhat larger. Secondly, the proscenium arch was reduced in height by almost 2' during 1964’s modernisation scheme and this would limit the possible size of the new screen were it to be positioned within the arch as, ideally, it should be.

Given the misguided 1972 extension to the balcony is now history, could it be that the space in the old front stalls area may yet still become additional capacity for screen 1 with access possibly at ground floor level as at Muswell Hill? 144 seats must inevitably limit potential viability when Bond, Star Wars and other hugely popular blockbusters are programmed.

The former front stalls area is now carpeted in mid grey and a platform/stage is planned in front of the suspended screen to facilitate interviews/Q + A sessions and performance.

The Odeon proscenium arch is hidden behind the screen frame which is positioned level with the first concealed lighting trough forward of the pros. Because of the type of seating used in the auditoria, two echelons are unused between Screen One’s current back row and the rear wall/projection portholes as sightlines would be restricted. I’m told the capacity of 144 will likely be increased once the two echelons have been increased in height up. Black curtains hang within the proscenium arch which can be seen by using the stairs at either side of the screen which lead to the former front stalls exits.

When the screen is blank, Screen One is quite dark and shadowy but I believe Everyman plan some kind of lighting feature here. The ground floor tiny screen which Reel put in is dismantled and will be replaced by “Spielburgers” restaurant.

The car park is yet to open and is full of skips which suggests a work still in progress to some extent.

The main foyer and circle lounge are nothing short of sumptuous, seating everywhere is very comfortable and plentiful and the numerous staff members could not be more welcoming and helpful.

Some photos of the reopened Everyman Cinema taken on January 2018 here (I echo the sumptuous design and helpfulness of the staff comments made by FanacticalAboutOdeon):–

I have now been treated to a tour of the Everyman and enjoyed two films in Screen One. Earlier this week I was shown around the ground floor former shop unit, Odeon managers' office/changing room and adjacent former strong room. The combined space is being transformed into a Spielburgers Restaurant. The kitchen and servery/bar are complete and tangerine velvet banquet seating (currently covered in polythene)lines the walls awaiting carpeting and, presumably further seating and tables. Tests are being carried out overnight to ensure the building’s electricity supply can safely cope with the kitchen’s additional requirements before final fitting out and opening.

The modest 144 capacity in Screen 1, the Odeon’s balcony, will be increased to just shy of 200 when the rearmost echelons in front of the projection ports are built up to ensure there are no viewing restrictions from Everyman’s signature seating. As it stands, Screen 1 at York has the Company’s largest screen and, given the vast space, the smallest capacity!

An example of Everyman’s investment and attention to detail, where many companies might consider it an unnecessary cost, is in the 1972 “mini” cinemas in the former rear stalls. Intent on providing every seat with a perfect view of the screen, it was decided to excavate below the previously sloping stalls floor and provide each row with a level of its own. The excavation has allowed generous steps down towards the screens, a consequence is that by the time the screen is reached, the space is noticeably heightened. The screens in the two “minis” will shortly be moved slightly further from the seating; at present, the front rows of these cinemas are not sold as the upwards angle of viewing is considered to be potentially uncomfortable.

During Reel’s unfortunate tenure, more than one person told me they found the little cinema in the former shop unit’s stockroom to be claustrophobic and with a “smell of hot metal”. A digital projector had been suspended from the ceiling above the heads of the audience and didn’t help matters in a space similar in height to many homes. Everyman took all appropriate steps to explore a wall cavity between the room and the first floor servery and a projector for Screen 4 is now accommodated therein and the beam now comes from a port in the cinema’s rear wall as, ideally, it ought. At a stroke, and with the help of the new seating, this small cinema becomes so much improved and seems a tad more spacious.

Just another small touch in a brilliantly thought through and incredibly detailed scheme. Everyman are to be congratulated on their conception, scale of investment and sheer faith in York and the City’s finest cinema. The ingenuity of the contracted design, technical and construction teams must also be appreciated. The building (of which I like to think I know every brick!) really has returned to its former glory this time – and more besides.

I hope all York will go along, be warmly and genuinely welcomed, regaled and entertained in surroundings of which Mr Deutsch would most certainly have approved.

Saw Mama Mia 2 in Screen One. The sofa and armchair seating is very comfortable with good leg room(plus tables) and now much reduced in capacity only extends to the former circle front. The area below that and the former stepping down to the front stalls is still visible but only used as an exit. The screen is now further forward in front of the proscenium which works well. I appreciate that not all 1930’s cinema fans will appreciate this scheme but it is in my view an improvement on previous visits under Reel and Odeon and gives a sophisticated life to an old building. The foyers have interesting alcove seating areas in what were formerly cupboards or ticket offices. The centre doors are not used now and have a seating area with tables. Entrance is from left and right doors. The central foyer bar looks good too. I glanced into screen 4 that was originally offices and although small the screen was quite good and of course more sofas. I assume screen 5 added by Reel on the ground floor is now the cafe adjoining the main foyer. All in all a nice place to see film and relax.