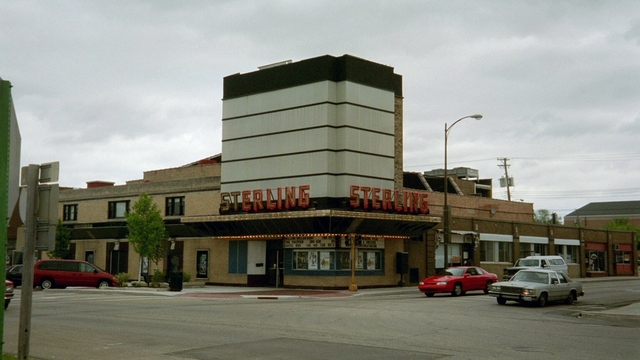 Originally built in 1924 for vaudeville and stage acts (original architect unknown), this 1,200 seat theater was partially destroyed by fire on July 9, 1943. It was rebuilt in an Art Moderne style designed by architect John R. McLane and opened on September 28 1944 with 1,020 seats. One of the features of the rebuilt Sterling Theater was a lighted tower, which became a beacon for entertainment in downtown Sterling.

It was later twinned and was taken over by Classic cinemas in July 1997. The lighted tower was rebuilt and re-lit by Classic Cinemas during a 2000 renovation.

From October 2003 until 2004, the theater was part of the Sensible Cinemas chain, but since July 2004, it was under new independent ownership of 21st Cinemas, as a discount house. The Sterling Theater also featured special free shows as well as an independent film series.

It is now known as the Sterling Cinemas and operated as a discount theatre by the Sensible Cinemas chain with a website http://www.sensiblecinemas.com/

This theater is now operated by 21st Century Cinemas, the same company operating the nearby Plaza 4 in Dixon. The site layout looks very similar to the Sensible Cinemas site, which makes me think the companies may be related. The SterlingTheater.com site linked above is now gone.

Is this theater for sale?

Yes, this stylish venue IS for sale! Check out: http://www.21stcinemas.com/sterling.htm

I understand this theatre has been successfully operated as a discount house but was closed in 2008 due to some management matters as well as some air conditioning problems. Those have been worked on and the owners plan to reopen the Sterling in early 2009. In the meantime, they are still offering the theatre FOR SALE. Contact Mark at 217-549-3000

Photo from December, 2010 of the former Sterling Theatre. Looks to be intact with what appears to be a For Lease sign in its window.

Skip Huston, who owns The Theater Management Group, said Thursday that he plans to open the brew and view – which means wine and beer with your movie, if you like – with “a brand new, exclusive film. A big, big movie for the summer.”

Huston had hoped to open in May, as it says on the theater marquee, but much work has yet to be done."

The earliest mention of the Sterling Theatre I’ve found in the trade journals is this item from the September 1, 1923 issue of Moving Picture World:

Another notice appears in the October 20 issue of the same publication:

“George Greenough, owner of the Grand Theatre at Sterling, Ill., plans to build a new house in that city to play both pictures and legitimate shows. It is expected that the house and furnishings will cost at least $200,000 and seat almost a thousand people.”

“A new picture theatre, to represent an investment of nearly $200,000, will be erected at Sterling, Ill., this winter, by G. Geenough [sic]. The policy will be pictures and the theatre will be strictly modern in every respect. Work will be started at an early date.”