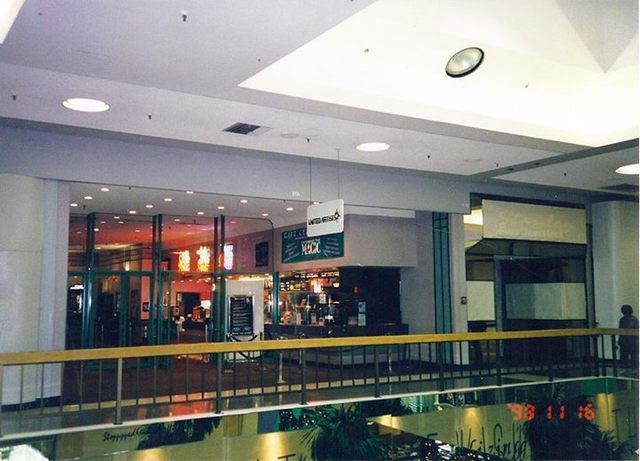 This theater was located in the Del Amo Fashion Square Mall which for a time was the largest indoor mall in the country.

They eventually folded after the opening of the Mann 9 in the same complex, which itself has now folded.

The theater was demolished in February of 2005.

I think this is where the Lucille’s and Barnes & Noble currently stand. If I am off course let me know.

@kencmcintyre – to answer your question. No. The B&N was a parking lot. Just about the NW corner of the B&N stood the huge UA marquee sign, which is now being used by MACY’S. The theatre was located just about where the Johnny Rockets is right now. Just to let everyone know, I was one of the last employees right at its closure. If you got some questions in the last few days of the theatre drop a question.

My condolences to Dan Barron’s family “RIP” Does anyone remember Delfin Fernandez. He was there after Bill Gartley and before Dan. I was also there when the car crashed into the exit of theatre #3, remembering the breakdown and buildup of the movies and the best of them all. Climbing the tree for the marquee “movie title change.

Who are you Ironhide27? It was probably the most dangerous marquee in the company. The last I heard, Delfin runs a theatre company in South America. I want to remind “early” Del Amo followers of “Ping Pong Pandemonium”, a promotion launched by Miss Burger in which helicopters dropped thousands of numbered ping pong balls over the parking lot behind the theatre, to a waiting crowd of thousands of people, stampeding from one side to the other, following the swaying copter, trying to catch them. Many injuries and lawsuits. But it was spectacular! I and my assistant managers watched from the roof as the catastrophe unfolded.

I thank you for the information Mr. Gartley.. I look forward to anyone else wanting to add comments. Karmelkorn was really good at the time.

I also remember that UA Del Amo was just fun. Location for several pilot programs that UA did but fun non the less. Great staff made it easy to handle on a fri or sat night even if was a big box office draw.

Mann 9 has been open for years. Both don’t show the same movies. Because Mann 9 was a much newer theatre with stadium seats they get most of the blockbuster movies. Both were located in the Del Amo Fashion Center complex. UA Del Amo 6 was located inside the mall near Montgomery Wards. Mann 9 was located outside the mall on Del Amo Circle East (now a LA Fitness).

No grand opening appeared for this cinema in the LA Times

It’s possible that a grand opening ad was placed in the popular local suburban paper, The South Bay Daily Breeze.