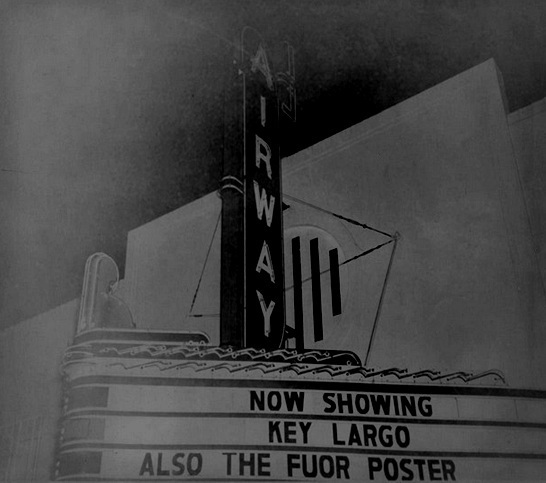 The Airway Theatre wae opened on August 11, 1940 with Ann Sheridan in “It All Came True”. It was listed in the 1950 edition of Film Daily Yearbook, when the address was given as 2008 Denton Road. On January 19, 1955, the Airway Theater was destroyed by a fire.

The Airway Theater was a P.G. Cameron theater that opened August 11, 1940 with Ann Sheridan’s “It All Came True.” The 780-seat theater was designed in 1939 by Raymond F. Smith using the conceptual name of the Love Field Theater due to its proximity to the famed airport. But the name Airway was assigned to the theater whose main innovation was that of stadium-style seating for better views of the screen.

For Cameron, who had started the Palace Theater in 1903 in Dallas and went on to run the Crystal and the famed Melba Theater which was sold for one million dollars, the four theaters of the Airway, Grove, Urban and Peak would serve as his Dallas theater holdings entering the War. However, before the end of WW2, Cameron ended up moving west and sold his Dallas theaters to J.G. Long. These four theaters would be the Long circuit’s Dallas entire portfolio.

The Airway was completely destroyed by a January 19, 1955 blaze. The fireproof projection area allowed the booth’s film and projector to be salvaged but everything else was a total loss. The five-alarm fire consumed the building and a neighboring cafe and damaged the adjoining Airway Automatic Laundry and Love Field Pharmacy. The Airway’s carcass was demolished and the theater’s entire run was less than 15 years. The last ad for the theater was “Knock on Wood” in October 1954 which likely means the theater turned to African American fare. As of the 2010s, the Airway’s spot was still not rebuilt upon.