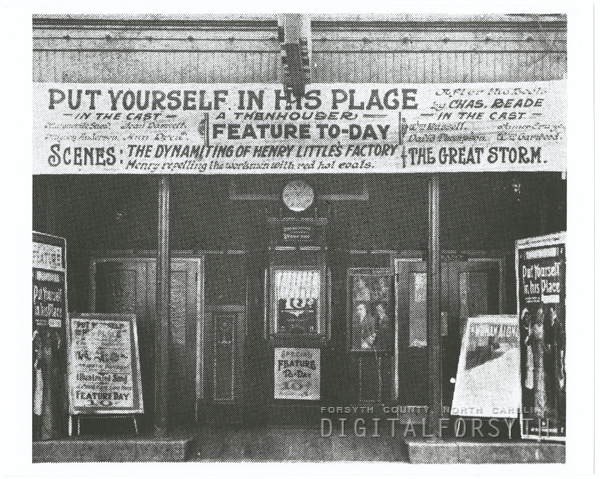 The Lyric Theater was opened prior to 1909. It was an early motion picture theater in Winston-Salem. By 1910 it had been renamed Amuzu Theater. The Amuzu Theater is listed in 1925 as being operated by the Piedmont Amusement Company. It was still open in 1929, but never made the transition to ‘talkies.

The book “Winston-Salem in Vintage Postcards,” by Molly Grogan Rawls, says that the Amuzu Theatre opened in 1910, replacing a predecessor called the Lyric which had closed. Here is the photo of the Amuzu. It can also be seen at right in this 1913 photo of 4th Street.

A comment on a Winston-Salem forum said that the Amuzu was in a building that was built about 1880, so it was a storefront conversion. It might have had other names before it was the Lyric. The comment says that the building was demolished around 1974, but doesn’t say when it closed as a theater. I doubt that it survived into the sound era, though.

This article about Winston-Salem’s early movie theaters says that the Lyric opened in 1909 and became the Amuzu Theatre in 1910.