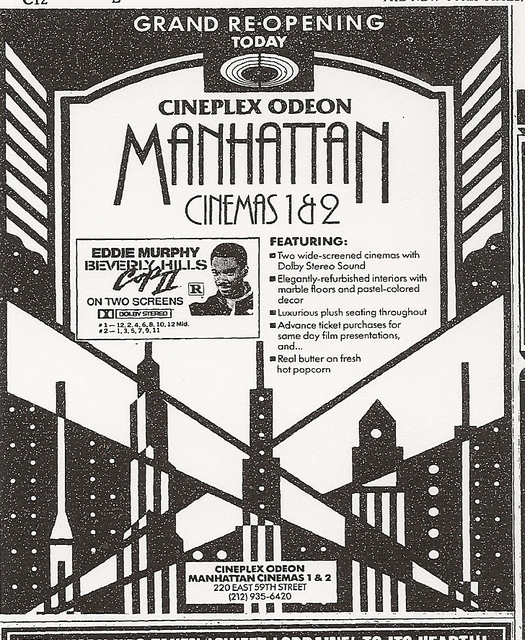 Opened on March 26, 1969 as the Pacific East/Avco Embassy East - yes one name for each screen as East side companions to Pacific’s Cinerama/Penthouse twins on Broadway.

Seth Lewis writes, “I remember seeing Steve McQueen in "The Reivers” at the Pacific East". The other screen was largely dedicated to films from Joseph E. Levine’s Avco Embassy distribution.

In 1979, Cinema 5 soon to be taken over by RKO Stanley Warner gave it another go by renaming this theatre the Manhattan 1 and 2 and a fair mix of first run programming - some mainstream and some art.

Again this was a house that never really had the same cachet as its brothers on the avenue.

Cineplex Odeon tried a discount policy here in the mid-1990’s. Before it closed in 1998 the theatre was screening Bollywood films. It was torn down a couple of years later.

Al I only know that when I saw “The Story of Joanna” here in 1975 the other theatre was showing “The Naughty Victorians”. That was also a hard-core film. I believe it was 1978 when I was dragged here by a girlfriend to see “The Savage is Loose”, but that arrangement was a private one year lease with the film’s star/ Director.

Garth, if memory served me correctly The Savage is Loose had its year long engagement at the former D.W. Griffith theater down the blockfrom Manhatten Twin.

Garth was correct. The Manhattan-1 was going by the name RKO 59th Street East at the time of THE SAVAGE IS LOOSE. That name would later be revived at the D.W. Griffith by Cineplex Odeon when they found out they owned no legal right to continue using the Griffith name.

The Office for Metropolitan History’s Manhattan NB Database says that the theater at 220-222 E. 59th Street was designed by Norman L. Wax. There is an architect of that name currently practicing in Lawrence, New York, but I don’t know if it’s the same one who designed this theater in 1968.

If the house opened in 1967 (per our introduction), then the 1968 project must have been a remodeling for RKO Stanley Warner, listed as the owners. If it was a remodeling it must have been fairly extensive, as the Database gives the budget as $100,000, which was still a considerable sum in 1968. The Database has no earlier entry for the original construction.

Opened late March 1969 with “LA PRISONNIERE” at the Avco Embassy East and “CAN HEIRONYMUS MERKIN EVER FORGET MERCY HUMPPE AND FIND TRUE HAPPINESS?” at the Pacific East.

Both theatres had lower level and upper level seating, I always sat upstairs, some films I saw there were National Lampoons European Vacation, Better Off Dead, City Heat and The Protector

I saw “When a Man Loves a Woman”, a romcom starring Andy Garcia and Meg Ryan, with my then-girlfriend (now wife) in 1994. Soon after that, the theater began to show Indian-language films. Now its gone.