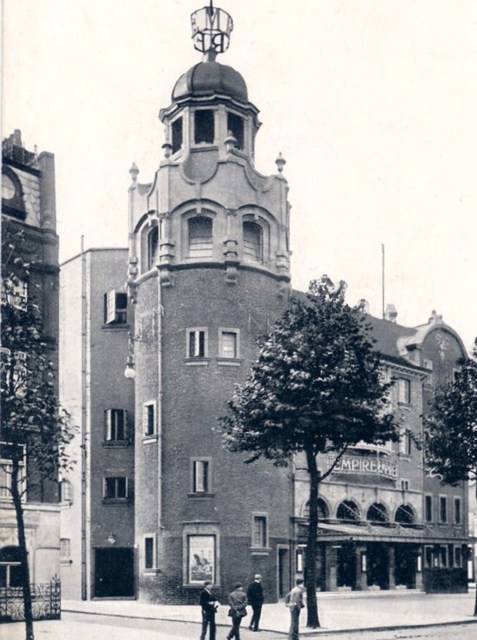 Located near the southwest corner of Shepherd’s Bush Green in the west London inner city district of Shepherd’s Bush. The Shepherd’s Bush Empire Theatre was opened on 17th August 1903 with a ‘Gala Variety Performance’ starring The Fred Karno Troupe. It was one of five variety theatres that architect Frank Matcham designed for Oswald Stoll.

The frontage of the theatre is in an Art Nouveau style, dominated to the left by a stocky tower with little windows and a lively Baroque style copula on top, which originally contained a lantern and a circular metal ‘Empire’ name sign. The centre of the facade has a four-bay arched entrance, above which are large bow fronted windows and decorations of cupids.

In the rather small foyer, a central staircase leads to the dress circle, with entrances to the orchestra stalls on each side. The upper circle and gallery have their own seperate entrances along the side of the building.

The interior of the auditorium is typical Matcham styled decorations, with hardly an unadorned surface to be seen. A square 30 feet wide prescenium arch is topped by an arched pediment, and on each side of the proscenium is a stage box located at dress circle level. Unusually these boxes face into the auditorium, rather than toward the stage! There are adjoinng boxes at the upper circle level which are topped by a semi-circular feature, an alternative scheme to the two Moorish style domes at Matcham’s Hackney Empire Theatre of 1901. Original seating capacities were for 471 in the orchestra, 396 in the pit benches at the rear, 299 in the dress circle, 270 in the upper circle and 419 in the gallery. The stage was 65 feet wide and 53 feet deep.

The Shepherd’s Bush Empire Theatre was a popular addition to the suburban London variety theatre scene, and was soon dubbed the ‘Coliseum of West London’, after Stoll had opened Matcham’s magnificently designed Coliseum Theatre on St. Martins Lane in London’s West End in 1904. All the great music hall artists appeared at Shepherd’s Bush Empire Theatre, within the first few weeks of opening, Dan Leno, Marie Lloyd, George Robey, Vesta Tilley and Harry Lauder had topped the bill. In the early years the American Bioscope was projected from a purpose built projection box and formed part of the variety programme. In fact it was so popular, that free film shows were held each afternoon between 3 and 5pm, the ‘free’ admission was with the proviso, that a ticket was purchased for the regular evening shows. In the summer of 1909, the Chronomegaphone was a huge success as an early form of ‘speaking pictures’, as seen and heard at the Imperial; International Exhibition at White City in Shepherd’s Bush. Feature films were a regular attraction at the theatre, playing in double bills on Sunday’s for one day only (due to live performances being forbidden on a Sunday), and the Empire Theatre was equipped with Western Electric sound system and continued Sunday film shows through into the late-1940’s.

Despite its success over the years, the days of Variety were numbered by the mid-1950’s and with the coming of Television, the Shepherd’s Bush Empire Theatre was one of the first of the London suburban halls to close. The final performance took place on 26th September 1953, with a variety bill that included Rob Wilton, Hal Monty, Krysta & Krystal, Stan Stennett, Dawn White and her Glamazons, The Allen Brothers, The Two Condons and Tessa Smallpage.

Three days later on 29th September, BBC Television took possession of the theatre, and almost immediately work commenced to convert the building into a TV Studio-Theatre. The invited audiences now sat in the former dress circle only. The upper parts of the building were painted black, and obscured by lighting gantries, which hid all traces of Frank Matcham’s decorations. The stage was extended forward into the orchestra stalls and TV cameras roamed around this area where once an audience sat. Within a month, one of the first shows to be televised ‘live’ was "Variety Parade" starring Max Bygraves, Eve Boswell, Gladys Morgan and the Tiller Girls. Many big hit shows were to be broadcast from the building including "What’s My Line" and "The Terry Wogan Show". After almost 40-years, the BBC transfered their operations to new facilities built into the White City Television Studios at Shepherd’s Bush, and the former Empire Theatre was put up for sale in 1992.

It was purchased by the owners, who also operated the former Astoria (now Academy) Brixton, and the Shepherd’s Bush Empire Theatre was restored close-to its original 1903 opening splendour, offering a programme of pop/rock concerts. It re-opened in February 1994 and has standing space in the former orchestra stalls area and conventional seating in the dress circle, upper circle and gallery levels.

The Shepherd’s Bush Empire Theatre has been designated by English Heritage a Grade II Listed building.

A few more pictures taken in 2005 – a very beautiful theatre!

I’ve driven past here hundreds of times – I never realised what an absolute gem it is inside!