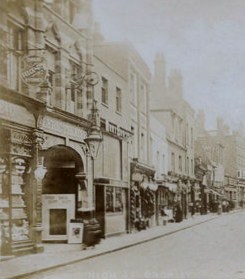 Built in 1899 as the Lyric Theatre, it opened on 4th February 1899. The theatre was actually built over a swimming baths and seated just under 1,000. In 1908 it was screening films, but reverted back to live shows in March 1909. In April 1909, it underwent redecoration and was refurbished, re-opening as the Grand Hall Cinema, screening films again. Closed again in 1911, it soon re-opened under the ownership of W.F. Jury and was listed with 680 seats in 1914.

Taken over by a company known as Living Picture Palaces Ltd. from 24th October 1924, it was re-named Grand Theatre. The building underwent an internal rebuilding and now had seating in the former swimming baths area and in a circle above, re-opening on 1st October 1926 with 900 seats. Its programming consisted of pictures on the screen, and variety on the stage.

It was taken over by Provincial Cinematotgraph Theatres(PCT) chain and in 1934 came under the control of the Gaumont British Theatres chain.

Gaumont operated the Grand Theatre as a cine-variety house until they closed it in May 1937. They had opened their massive 2,498 seat Gaumont super cinema along the High Street in 1936 and still operated the nearby Palais de Luxe Cinema.

The Grand Theatre was converted into a strictly live theatre venue, but in 1940, it was requisitioned by the Government (as was the Palais de Luxe Cinema) and both buildings became food stores for the duration of World War II.

After the war, the building was de-requisitioned and it re-opened on 26th December 1947 as the New Theatre and continued as Bromley’s live theatre until it was destroyed by fire on 6th May 1971. The remains were later demolished. In 2009, a branch of Barclay’s Bank stands on the site.

The statement that “in 1908 it was screening films” would appear to be incorrect, since it was actually closed throughout the whole of that year; the swimming baths referred to were never actually active; it reopened as a live venue (with some cinema use) in April 1909 (and not as the “Grand Hall Cinema”), whilst the Gaumont-British division that it actually became part of was Denman Picture Houses (as the nearby Palais became part of PCT). It was of course, ultimately replaced by the Churchill Theatre.

Also…I note that great care is taken with exact postcodes for the sites covered, perhaps similar attention could also be given the the inclusion of the addresses for some of them …the 111 High Street address given here for the Grand Hall is also erroneous and was actually the original (before street re-numbering) of the Palais de Luxe cinema further up the High Street. The local street directories, held at Bromley Local History Centre, will be able to provide the correct original address, and the one subsequent to the re-numbering of the High Street.